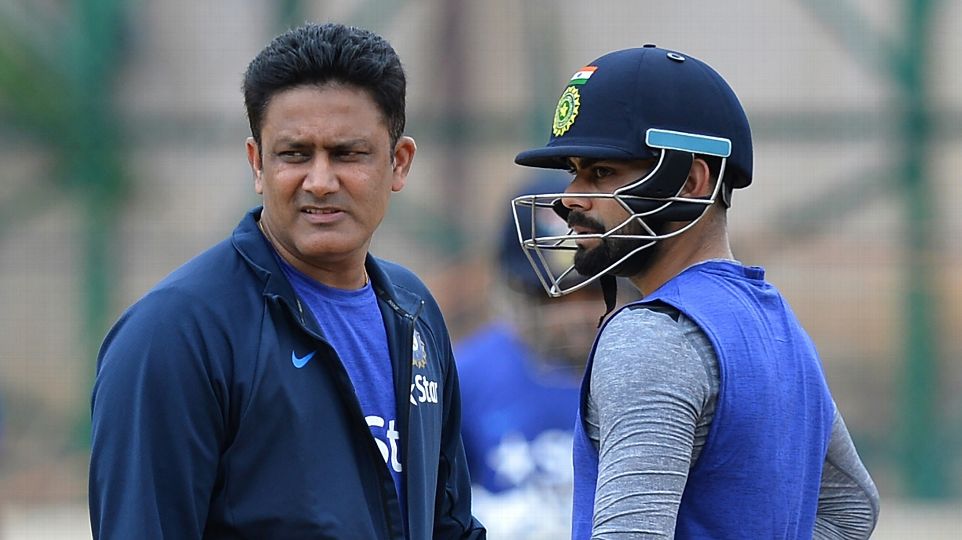 India’s campaign for Champions Trophy has begun under a cloud of discontent within the dressing room with the captain, and possibly a few other senior players, expressing a lack of confidence in their head coach.

Speculation had been rife ever since the BCCI chose not to automatically extend the tenure of Anil Kumble as the head coach, choosing instead to advertise the position, and it has now emerged that the decision was made following feedback from Virat Kohli about Kumble’s coaching method, which he is said to have described as “intimidating”.

It is understood that Kohli relayed the sense of discontent to the BCCI’s top office bearers as well as the Committee of Administrators (CoA) before the team left for England. He is also understood to have spoken to Sourav Ganguly, who is part of the cricket advisory panel which has been tasked with deciding the coaching option.

The players’ concerns are thought to centre mainly around Kumble’s man-management skills. In the words of one official familiar with the details, Kumble has been conducting himself like a “headmaster” at a school. Such an approach, the official said, “had not gone down well” with the players who are used to a more relaxed dressing room. Some players – not the bigger personalities like Kohli or MS Dhoni – have felt “a bit intimidated” by Kumble’s approach.

Such has been the approach, the official said, that some of the injuries that have ruled players out during Kumble’s tenure were not strictly cricket related. “Kumble was pushing hard. The bulk of them [injuries] are non-cricketing injuries. One of the players was stressed out. So the team is not a happy lot.”

Based on the player feedback, the BCCI decided that the time to “change” had come and the “best” way to move forward was to put in place an advertisement inviting fresh applications. The official admitted that the timing was not ideal – the advertisement went out on the day Indian squad arrived in London to defend the Champions Trophy, and applications for the job close on the eve of the tournament opener – but he said the process had to followed.

The most telling public comments came from Kohli, who said last week he did not find anything untoward with what the BCCI was doing. “The process has been followed every single time the similar way in Indian cricket for the past so many years is what I know,” Kohli said at his first media briefing upon landing in England. “Even the last time the post was up for a change the same procedure was applied. With the term being one year, the procedure is being followed in the same manner. I don’t see anything very different from what has happened in the past. That is something the board has recognised. They want to follow the same pattern.”

Kohli was equivocal in his response to the success India have had under Kumble. “When you have results come your way, the contribution is from every part of the team,” he said. “It is not from a single source to say the least. Everyone works hard equally if not more than the other person.”

Kumble has not yet spoken publicly about the situation. He is, however, bound to be disappointed considering India have only lost one series in any format under his charge: the two-match Twenty20 series in Florida against West Indies last August. Kumble has also been front and centre in talks with the BCCI over enhancing the contracts not just of the national team’s players but also domestic players and Indian coaching staff.

The situation also puts three other Indian legends in an awkward position. It was only last June that Kumble was nominated by the three-man cricket advisory panel comprising his contemporaries, Sachin Tendulkar, Sourav Ganguly and VVS Laxman; Kumble wasn’t in the original shortlist of candidates the BCCI had finalised because he had no formal coaching experience. But it was at the panel’s insistence that he was put in. And now they have to go through the process again; it isn’t yet known if Kumble will go through the process again. Ganguly is currently in England, doing television commentary for the official broadcaster of the Champions Trophy.

At the time of Kumble’s appointment, the BCCI made out the contract for only a year saying that would give Kumble time to prove his coaching credentials. The former BCCI president Anurag Thakur had said that a review would be carried out after one year. Incidentally, Ajay Shirke, who was the BCCI secretary last June, had said that when the review was done, Kumble should find himself in the “driver’s seat” considering India were playing a long home season comprising 13 Tests and a couple of ODI series. Kumble might not be holding the steering wheel anymore.