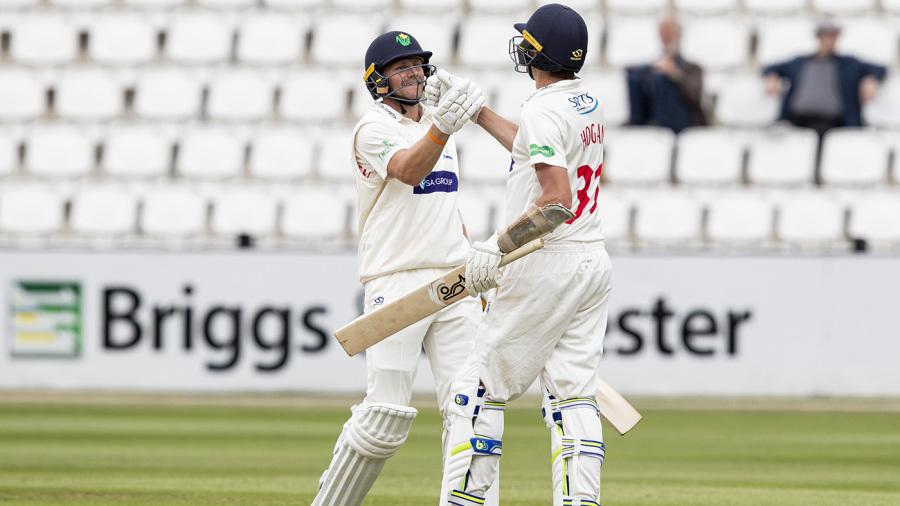 There has surely never been a bleaker start to the Championship season than this, well, not since last year anyway. Cricket took place at Headingley, but it was cold comfort, staged stoically in front of empty stands in the hope of better times ahead.

Perhaps Yorkshire can be grateful the stands were empty. As Glamorgan played with startling enterprise to turn 132 for 7 into 310 for 8 by the close, Headingley was not quite the same without a few derisive cries of “Rubbish, Yorkshire!” and “Call yourself Champions!” But they’ll all be watching on in-house streaming services and can be trusted to store up resentment for when the crowds finally return.

Timm van der Gugten was Glamorgan’s unlikely batting stalwart. His career-best 80 not out at No. 9, from 134 balls, was an innings of optimistic muscularity and only the fourth time he had passed 50. A rebellious stand of 122 in 33 overs with Dan Douthwaite was followed by some hearty wind-ups by Michael Hogan, who walked off with 40 and will have visions of his fourth first-class fifty in the morning.

Douthwaite produced the most considered resistance. He failed to break through at Surrey and Warwickshire and was given his chance at Glamorgan during studies at Cardiff University. After a decent all-round season in 2019, he had a stint at No. 6 last summer, but he was back at eight, at least for now.

Douthwaite was finally silenced with the new ball five overs old when he allowed a delivery from Ben Coad to strike his off stump. He will relish memories of a hooked six against Duanne Olivier which was high enough to have required stepladders. Telling Olivier it’s not a pitch for bouncers is like advising Piers Morgan to avoid publicity.

Even Douthwaite’s belligerence came with moments of fortune, most notably in a wild slog against Matthew Fisher which careered over slips. As the seamers flagged, he deposited the offspin of Joe Root over long-on for six in a manner that informed Root that part-time offspin might have its moments in international cricket, but it had no place on a freezing day of the Championship in April.

Six years have now passed since Yorkshire’s back-to-back Championships under the stewardship of Jason Gillespie, and Mark Arthur, Yorkshire’s chief executive, has told the annual meeting on Zoom that the county can boast its strongest squad in his near-decade in charge.

In these parts that represents title talk – and leaving out David Willey did suggest either strength in depth, misguided selection or a little bit of both. Willey appeared as 12th man at one point in a hi-vis jacket, Yorkshire woolly hat and face mask which was not how it used to be done in the days of Lord Hawke.

Douthwaite’s misjudgement extended the disastrous leave-alones to three, one in each session. Without them, Glamorgan’s situation could have been even better. Fisher, who, at 23, needs to kick on this summer to justify the expectations of his teenaged years, tailed the ball in slightly to hit the off stumps of David Lloyd in the morning and Callum Taylor after lunch.

Glamorgan’s gusto brought life to these strange, slightly artificial proceedings. Infection rates may be falling fast, but Yorkshire is now Covid Central according to figures from Centre for Cities, which suggests that seven of the top eight towns and cities for new infections are in the county. The storm is not yet weathered.

Nevertheless, Championship cricket has withstood jokes for at least half-a-century about how nobody watches it, which suggests it is perfectly designed to play to quarter-full grounds from May 17. Even those who do turn up tend to prefer their own company so much that they inventing social distancing long before anybody had even heard of the phrase.

Before van der Gugten and Douthwaite wrested attention, pre-match interest had centred upon only the second cricket meeting of the Root brothers, the previous being a Royal London Cup tie four years ago. “I’ve not seen him since September,” observed Billy, who has been locked down in Wales while Joe pushed his Test batting average towards 50 with impressive shows in Sri Lanka and India.

Reintroductions were made from third slip as Billy reached the wicket at 29 for 3. He fashioned Glamorgan’s early resistance with a workmanlike 43, and narrowly survived being run out by Joe on 38 when he pushed Fisher into the off side, chanced a single and was short of his ground when the throw missed the stumps. Coad eventually dismissed him, from around the wicket, leaving him for Jonny Tattersall to hold a low catch to his left.

There was a flirty half-century, too, for Kiran Carlson, who seems to like a square drive. The new-ball pair of Fisher and Coad can sustain Yorkshire, but the captain, Steve Patterson, is 37 now, and Olivier must dream on days like this of the hot sun and fast, bouncy pitches of his native South Africa.