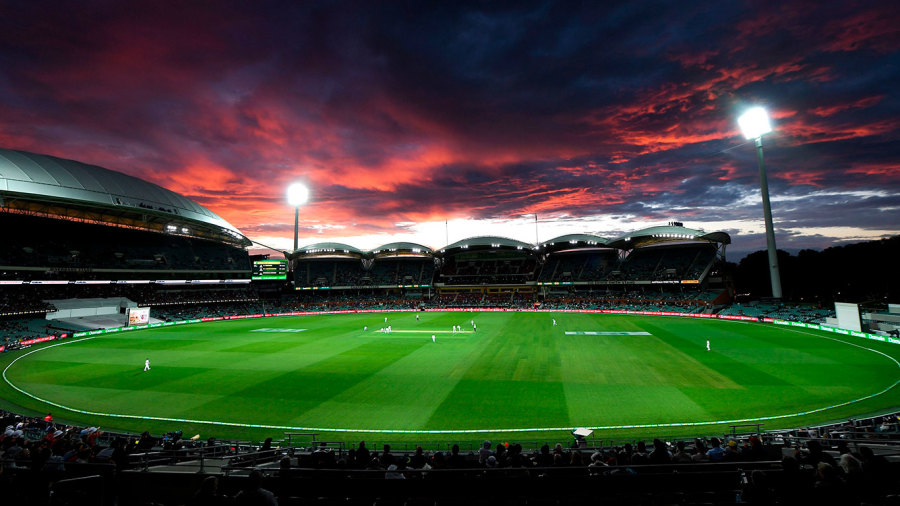 The view across Adelaide Oval © AFP

Four consecutive weeks of hotel quarantine must elapse before Justin Langer – or any of the other West Australian or Tasmanian members of Australia’s England tour party – can see their families again. And that’s just for starters.

Langer was at close to his most wide-eyed and pleading on a recent podcast with the England rugby coach Eddie Jones, as he emphasised the possibility that some members of the national team may go 173 consecutive days without seeing their families this summer.

It’s the sort of assignment that gives lie to the notion that cricketers are better equipped than most to deal with the maze of hubs and quarantine periods inherent in a “Covid normal” home summer, since overseas tours or home series have about as much in common with coronavirus hub existence as train journeys do with space flight.

ALSO READ: Steven Smith ruled out of England series after first game: ‘We saw how unwell he looked’ – Langer

To that end, Langer had two clear takeaways from England. The first being that every possible chance must be taken to allow players to see their families whether that means Steven Smith missing a game here and there, or Pat Cummins continuing to skip the Big Bash League. The second is that within the hubs themselves, all efforts must be taken to keep things fresh for players and staff, while also ensuring that perspective is retained: losing a game is not the end of the world, nor the start of a global pandemic.

“We know how hectic it’s going to be, a long time away from their families, a long time away from home, but we know the sacrifices we have to make to ensure that cricket stays up and running and we keep entertaining people,” Langer said. “That’s the main thing, the quarantine issues which are going to cause the greatest angst for the families, whether it’s two weeks before they come into our hub or for example in Perth or Hobart and Tasmania’s case, if our families come into the hub, then they’ve got to quarantine for two weeks when they get home.

Every opportunity we’re going to get for our players and our support staff to see their families we are definitely going to take it, but it’s really complex

“So it’s really problematic but I guess it’s the sacrifices we have to make. It’s something I’ve talked about for the last four or five months with CA, no doubt we’ll talk about it with the ACA, it’s one of the contentious issue at the moment, but our families all have their lives to live, with the current restrictions in place it’s problematic for a lot of the families. We’ll just keep working our way through those things.”

Government restrictions and requirements are, according to Cricket Australia, the main reason why the summer schedule is yet to be announced even as the first international cricket of the season is due to be played between Australia and New Zealand women in Brisbane as soon as Saturday. Langer said that any player who put his hand up and requested time out of the bubble would have their wishes respected, citing the example of Glenn Maxwell’s break from the game on mental helth grounds late last year.

“It’s not so much about the training, all our guys are super fit, they’ll be up and running and playing, it’s more to do with quarantine regulations and every state’s different,” Langer said. “That’s where it becomes so problematic and that’s where our management of the players individually and collectively is going to be so important.

“Every opportunity we’re going to get for our players and our support staff to see their families we are definitely going to take it, but it’s really complex. We saw it with Glenn Maxwell last summer. One of the most important things in this Australian cricket team is we care for our people. We are all very respectful of the present climate with guys being away from home, guys living in this hub life, and we are looking at ways to manage that. The Latin origin of the word culture comes from the word care. And hopefully we are showing that consistently that we care for our people.” Mitchell Starc, Pat Cummins and David Warner have rarely featured in the BBL due to Australia duty © Getty Images

There must be consideration, too, for players kept in reserve and thus missing out either on Sheffield Shield assignments for their states or BBL outings with their clubs. “One of our lessons from England, whatever [size] our squad is going to be, they’re going to see a lot of their mates playing Big Bash cricket or potentially playing some Shield cricket,” Langer said. “It’s not going to be as easy as before to come in and out.

“We are also very mindful though that we want all our cricketers playing as much cricket as possible. So, working out the exact number [for the squad], won’t necessarily be a science. There’ll be an art to it. So that we get the balance between guys playing and guys being ready in case there’s some infections or anything like that.”

As for keeping things fresh, Langer was able to call on a new pair of eyes and many more opinions from the assistant coach Trent Woodhill during the England tour, who substituted for Andrew McDonald due to his pre-existing IPL contract with Rajasthan Royals. He also introduced a boxing “fight club” to the squad, albeit in the form of boxing training sessions with hand pads: as much as Langer is known as a pugilist, there are no immediate plans to send Matthew Wade into the ring against Mitchell Starc.

“I know from a lifetime of doing it, there’s real advantages in staying fit and healthy and letting off some steam. A number of the guys got all our boxing gear over here and we’ve been doing a bit of that, as much to keep us stimulated as anything,” he said. “I’ve said for many years that the best form of training for batting particularly is boxing, because you’ve got to concentrate, its footwork, its technique, you’ve got to face your opponent, got to have good defence and good offence.

“For me it’s a lot of fun, it’s something I’ve done for a long time, I know some of the players are enjoying doing some boxing training away from the normal realms of cricket training. We have to be really conscious that we keep things as fresh as possible, because if you’re going through the same routine over and over any way we can break it up is going to be really important.”

Last but not least will be the need to take whatever environmental advantages that are available. In Adelaide, Langer has been gratified to see that the new hotel built into the oval’s eastern stand does not overlook the ground directly, but instead offers a sweeping panorama of the parklands and the nearby cathedral, granting a precious chance to switch off from the sights and sounds of professional cricket.

Nevertheless, it will be hard at times to avoid a sense of the walls closing in – as Langer discovered when the hotel’s curtains began shutting automatically on his view of St Peter’s.