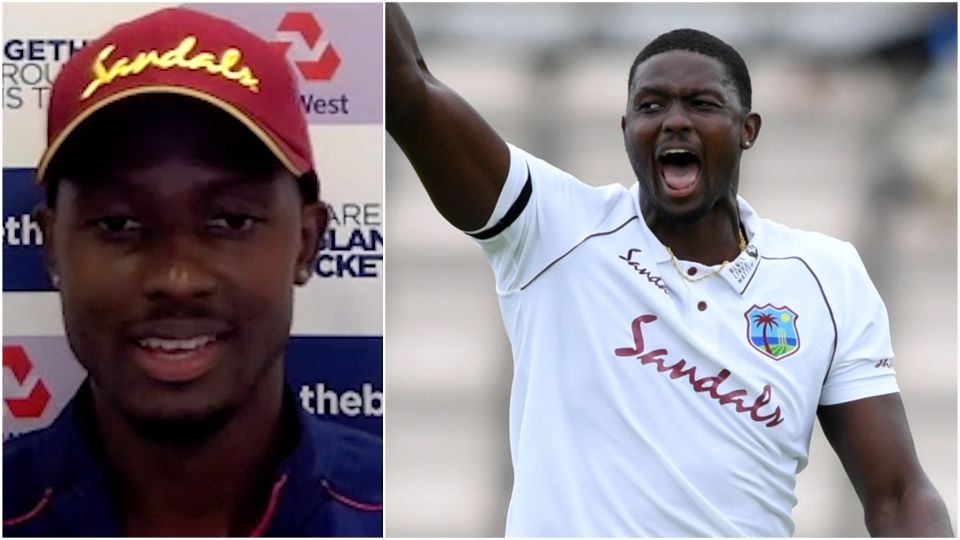 I’ve got the five-for, now I just need a hundred – Holder

Jason Holder has described his delight at his plans to dismiss Ben Stokes coming to fruition on Thursday, after his career-best bowling performance put West Indies in the box seat at the Ageas Bowl.

Holder had dismissed Zak Crawley and Ollie Pope before lunch in a probing spell that left England reeling at 87 for 5, but after a loose start to the afternoon session, Stokes and Jos Buttler looked as though they might be getting away from West Indies with a counter-attacking partnership. Stokes had been put down twice – once by Kemar Roach, running round from long leg, and the other a simple chance that Shamarh Brooks shelled at short cover – when Holder came back into the attack after the break, which he described as a “pivotal moment” in the match.

“It was a big wicket to get,” Holder said. “Stokesy was looking quite set. We put down two chances and he was looking to make us pay for them. When I came on, his partnership with Jos was starting to blossom, and it was important to break that partnership quickly and not let it materialise into something that could really hurt us.

“I just wanted to be really consistent to him. He was pretty settled and countering the line that we were bowling by walking across and walking down. I was getting just enough movement there to keep him at bay, and I wanted to keep him playing.”

Stokes had used his feet in an exaggerated manner throughout his innings, regularly taking two big strides down the pitch or shuffling across to cover his stumps, and Holder said that it was crucial that his bowlers were not thrown off by his movement.

“He was just trying to offset our lines, and a little bit on our lengths too,” he explained. “I think he was trying to get outside the off stump, and force us to either bowl at his pads or to take the ball wider so he could leave. “We were pretty much getting the ball to shape away, but I just wanted our bowlers not to leave the stumps and force him to play off the front foot. The pitch didn’t really have enough zip for us to be consistently bowling short, and when you bowl short at him, you take more modes of dismissal out of the equation. Yes, he did top-edge a pull, but for me that was more of a length ball that he really didn’t get on top of from Alzarri – and Alzarri has that pace that he can definitely put him back.

“So I just wanted our bowlers not to get thrown off by it, but to keep him playing. One of the criticisms I had with our bowlers yesterday was that we maybe didn’t make England play enough, but I think today we did a much better job in making them play, and obviously we got the results.”

Holder had rallied his troops just as Stokes and Buttler started to get away from them, and he admitted his frustrations that they had been able to score on both sides of the wicket. Throughout the tour he has preached the importance of discipline among his bowlers, and said he was delighted that they had managed to stem the flow of runs and find breakthroughs as a result.

ALSO READ: Taking a knee ‘meant the world to me’, says Jason Holder

“I wanted the guys to get back on it. Shannon [Gabriel], I gave him a quick burst but it didn’t work the way we wanted. So for me, my role was just to come in and not look for wickets but to challenge their techniques and be disciplined. I think once I go into those areas long enough, more often than not you’re going to get the results you’re looking for.”

His performance was perhaps all the more remarkable on account of the lack of overs he had bowled so far on the tour. He had managed only five across the two intra-squad warm-ups while nursing an ankle complaint, and admitted that he felt “a bit sore” after getting through 20 on the second day. “Leading up into the Test match I hadn’t got the overs I wanted under my belt,” he said. “Maybe that helped me to be fresh?”

Holder wondered on the eve of the Test whether he got the credit he deserved as an allrounder, not least in comparison to Stokes, his opposite number in this match. On Thursday, he admitted that he had “soaked in” the adulation for his performance, but insisted that his job in the match was not even half-done.

“My Test match is far from over,” he said. “I’ve still got a massive contribution to make with the bat, and that’s where my focus is going to be channelled now in this innings. One of the things I’ve always strived to do… was to score a hundred in England and to take a five-wicket haul here. I’ve ticked one box so far, so I guess it’s now left for me to knuckle down and try to get a hundred.”

Matt Roller is an assistant editor at ESPNcricinfo. He tweets at @mroller98