Without Statsguru-ing, who’s the best one-change fast bowler in Test cricket since 2018?

How many of you guessed it is Jason Holder? Pat Cummins, Neil Wagner, Mohammad Shami; any of these would be valid, understandable guesses. All three have over 60 wickets each in that period (for bowlers with more than 20 wickets), compared to Holder’s 39 but it is Holder who has the best average (14.66). He also has the best economy (2.66). He has the best strike rate of the three. He has the most five-fors in this period – four – the joint-most with Wagner.

Usually, when we think fast bowling, we think speed. More so when we think Caribbean fast bowling. Holder is the tallest fast bowler in Test cricket. He is strong. Yet he is not quick. And so the perception builds about him, that he’s somehow lesser.

Yet fast bowling is not just speed. Control, discipline and, most importantly, skills – it is this package that makes a fast bowler complete and this that has made Holder one of the best fast bowlers in all conditions, on any continent, with any ball in the past few years.

Since 2017, in countries where the Dukes is used – England and West Indies – Holder is on par with the master – James Anderson.

The England strike bowler has 82 wickets in 19 Tests at 17.10 with an economy of 2.43. Holder has played three fewer matches, but has picked 67 wickets at 17.97 with an economy of 2.49. In the rest of the world, where the Kokaburra and SG Test balls are used, Holder has played just five Tests, taken 14 wickets (one five-for) at a healthy average of 25.92. He’s still not easy to score off, conceding just 2.44 per over.

On Thursday Holder put that complete package on full display to rack up his best Test bowling figures of 6 for 41. Asked to bowl, in the first match of a series away from home, playing their first Test match since last November, the stakes were high. The onus was on his fast bowling attack, which Roddy Estwick, the Windies assistant coach, said in June could better any team in the world. 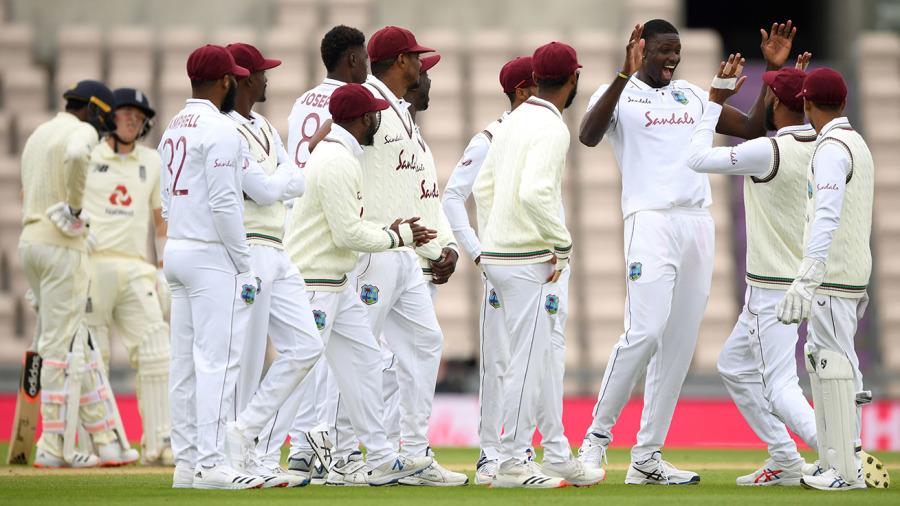 At Bridgetown, a year ago, Kemar Roach had skittled out England for 77. At lunch on Thursday England were struggling at 106 for 5 with Shannon Gabriel snaring three wickets with extreme pace. But Ben Stokes had a reprieve on 14 when Roach dived to pouch a dying ball at deep square leg in response to a perfect short-pitched delivery from Alzarri Joseph. Immediately after the break, Shahmar Brooks dropped a sitter at short cover off Roach.

Stokes along with Jos Buttler took the charge to Gabriel, who pitched wide and short in contrast to the fuller lengths in the first session. Holder was in the slips watching the drama unfold. He took over from Gabriel straightaway.

In the morning, as ESPNcricinfo’s ball-by-ball data recorded, Holder hardly bowled a full delivery. But as he built up his rhythm he improved. Post-lunch Holder bowled only a dozen deliveries short of good length. The best length to bowl on a pitch with variable bounce and conditions that supported seam movement was on a good length. Post the break Holder capitalised, pitching 20 deliveries on a good length 20 which fetched him three wickets.

Two of those were Stokes and Buttler, men who were threatening to take England swiftly into a commanding territory. From the slips, Holder would have observed Stokes stepping out of the crease to negate any swing and take advantage each time the ball was pitched fuller. Without getting distracted Holder continued to attack the off stump. Off the second delivery in his second over, Stokes attempted to outsmart Holder by charging his counterpart. The ball pitched on length and straightened. Stokes let out a smile.

Next ball Stokes was on the march. Holder pitched slightly fuller from wider of the crease. But the ball pitched again on off stump and this time took the outside edge as Stokes attempted to play across. Stokes shook his head in disgust. Holder celebrated.

An over later, Holder came closer to the stumps, pitched on a length, drew Buttler forward as the ball once again took the outside edge which Shane Dowrich pouched smartly. Holder had snatched the momentum back.

ALSO READ: Taking the knee ‘meant the world to me’ – Holder

As a fast bowler, Holder has plenty of strengths: the height from where he delivers, his wrist is straight, as is the seam most times, and he actually moves the ball in the air and off the pitch most in this Windies bowling line-up. And he uses the crease wisely. These are things Holder has observed and learned from the likes of Anderson and Glenn McGrath, Holder told Sky Sports.

Holder has now seven five-fors, which puts him fourth on the all-time list of captains. In addition to getting the milestone four times at home, Holder has taken at least five wickets in an innings in India (2018) and Sharjah (2016) – with non-Dukes balls – and in two places that pose unique challenges for fast bowling. 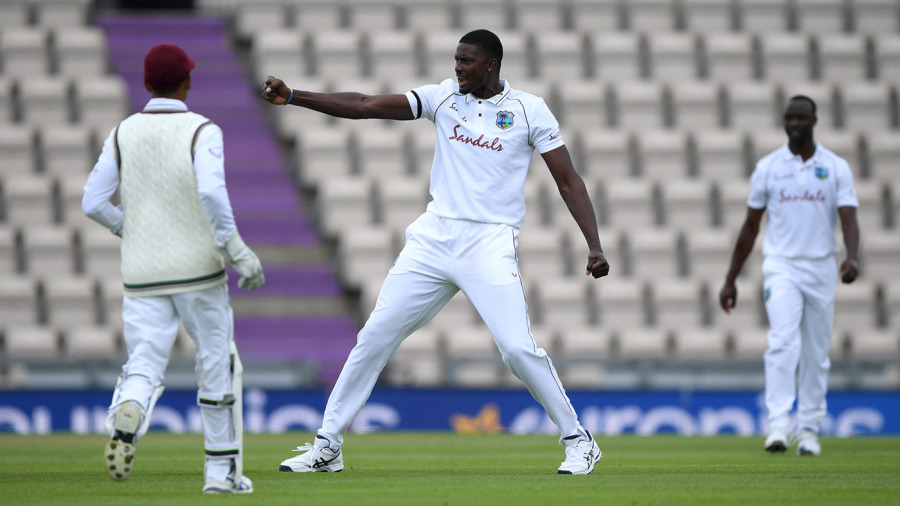 In a chat with Ian Bishop after West Indies had won the Wisden Trophy at home last year, Holder had said that performance in the UAE against Pakistan four years ago was the turning point of his career. Remember he was just one year old in international cricket then. Pakistan were leading the series 2-0 going into the final Test in Sharjah. Holder went wicketless in the first innings. On the third evening he had three wickets. Next day grabbed his maiden 5-for to set up the victory.

During the CPL few years ago, Mel Jones, the broadcaster, asked Holder if he fights fire with fire. Holder said he fights fire with water. That is Holder’s character: he is naturally aggressive, but does not like to wear it on his sleeve. He knows his job is that of a leader: to motivate, guide, mould West Indies into a successful unit.

England will wonder what is it that brings Holder’s best against them. In 2019 it was Holder’s maiden double century that set the tone for the series win. Holder became the No. 1 allrounder in ICC rankings. A year later Holder now has his best bowling figures against them in Test cricket.

He is not like West Indian fast bowlers we are used to. He is an understated personality and he is not spoken about as much, but right now, Jason Holder is one of the best fast bowlers in cricket.