It has become a bit of a trend to have one of the showpieces matches of the World Cup around one month into the tournament. From a logistics and broadcasting point of view it makes sense: either India v Pakistan injects new life into a tournament that might be flagging a bit, or it boosts an already high-flying tournament further. In 1996 and 1999, the match up happened after the group stages, and so owed a bit to luck. This time, both India and Pakistan are in the same group, and the end of the first round is in sight.

This is India’s last league match. Pakistan have one more in hand, against Zimbabwe, for which the forecast is not too bright.

India are better placed, having shrugged off the starting blues of a huffing and puffing victory over the Netherlands and a crushing nine-wicket defeat to Australia to string together wins against Zimbabwe, Namibia and England. Pakistan have had almost the same results as India – with the key difference being they were beaten by England.

The more subtle difference to this India-Pakistan match-up is that for the first time in World Cups, India enter this game as favourites. Through the 1990s, Pakistan were the stronger side. Even though they never managed to beat India in a World Cup match – an aberration that is threatening to take on the shape of a bogey now – they had the better results bilaterally and overall. Now, it’s India who are the stronger side. The resurgence that began at the turn of the century under the charge of the Sourav Ganguly-John Wright duo has meant India have steadily become a greater force.

That has coincided with Pakistan’s cream of the 1990s having passed their peaks.

That said, the Pakistan bowling is still one that inspires awe. Wasim Akram already has 12 wickets, second-highest in the tournament. Shoaib Akhtar isn’t too far behind, but his ten wickets have come at a high economy of 5.29. Captain Waqar Younis has had a quieter time.

As has historically been the case, the battle that will get the most attention is that of India’s batsmen against Pakistan’s bowlers. That high economy rate of Akhtar’s will need to be reined in against the Sachin Tendulkar–Virender Sehwag opening combo. Tendulkar, in particular, has hit the zone in this tournament. Already the leading run-scorer, his 371 runs are nearly thrice as many as Pakistan’s leading run-getter Yousuf Youhana, who has 128.

Ganguly and Rahul Dravid have also been among the runs. With India’s Big Three in form, and the sparkling talents of Sehwag, Yuvraj Singh and Mohammad Kaif around them, India’s batting looks settled after their rocky start. The bowling might be what gives India an edge. Their pace trio of Javagal Srinath, Zaheer Khan and Ashish Nehra might not quite have the ring of Akram-Akhtar-Younis to it, but they’ve come together nicely in this tournament. Nehra, particularly, will be flying high. He slipped and fell on after bowling just one ball against Namibia. There were injury fears about his seemingly always-brittle body, but three days later, he destroyed England with 6 for 23.

So while the India’s batsmen against Pakistan’s bowlers battle will be riveting, the one between India’s improved bowlers and Pakistan’s faltering batsmen might prove equally decisive.

He was the key wicket in this match-up in 1996 and 1999. He was an important wicket in 1992, and won Man of the Match then. And Sachin Tendulkar continues to be the wicket all opposition captains want above all others in 2003 as well. He has already gone where no man has in ODI cricket, the first to cross the 10,000-run mark, and it’s remarkable how central he has been to India’s fortunes for more than a decade now.

He has been a rejuvenated man in this tournament, back at his favourite opening spot. From May 2002 till the New Zealand series just before the start of this World Cup, Tendulkar has batted at No. 4 (twice at No. 3). But on the double principle of ‘give your best batsman as many balls to face as possible’ and ‘let your best batsman bat where he feels most comfortable’ – India have handed the opening spot back to Tendulkar. The results have shown immediately. His lowest score in five matches so far is 36, and he’s hit at least a half-century in each of the other innings.

Pakistan need to do what no other bowling attack has managed so far in the tournament, and get Tendulkar before he hits his stride. It’s a vanishingly small window. 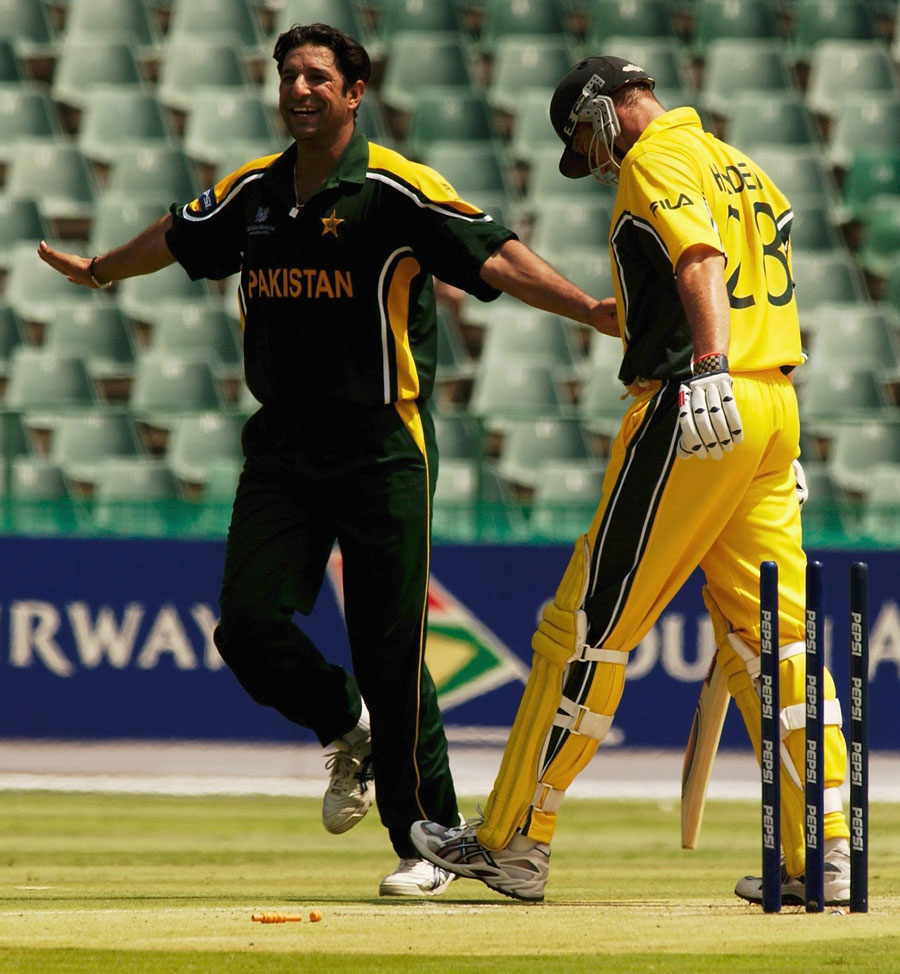 Wasim Akram went wicket-less in 1992, was forced to pull out just before the match in 1996 to a huge controversy, and had a decent outing in 1999 without his usual wizardry. Now 37, it’s unlikely he will get another tilt at India in a World Cup game. He needs to summon up one magic burst, preferably at the top of the innings to put India’s vaunted batting line-up on the back foot. He’s coming off a five-wicket haul – albeit against Namibia – but he’s shown that flashes of the old genius still remain. Akram had to cop massive criticism in the wake of the 1996 loss. He has seen more than most how an India-Pakistan match can make or mar fortunes. His legacy won’t get affected by a failure in this game, but success here might just add a nice little bow to a legendary career that is in its twilight.

India have shown a marked preference for an attack comprising three seamers and a spinner so far, and there’s no reason to believe that will change. Khan, Srinath and Nehra have manned the pace attack, while Harbhajan Singh has been preferred over Anil Kumble, no doubt gaining an edge due to his greater batting and fielding chops. India can afford to go with four specialist bowlers only because several of their batsmen bowl. They can call on any of Tendulkar, Sehwag, Yuvraj, Ganguly or Dinesh Mongia to deliver a few overs.

Having strung together a winning sequence since that loss to Australia, India might want to stick to their combination and tactics.

Pakistan haven’t had as settled a line-up as India, though they might want to consider bringing back the mercurially talented Shahid Afridi for this encounter. In a match of nerves, his insouciant X-factor could tilt the scales towards Pakistan. If they bring back Afridi, the man to miss out could be either Taufeeq Umar or Saleem Elahi, though being an opener might give Umar some cushion.

The SuperSport Park in Centurion may be in the Highveld in South Africa, but it’s going to have a subcontinental air to it come March 1. India beat South Africa in the very first ODI held here in 1992, but their thrashing by the hands of Australia a week ago was also at this venue. The pitch should be a good one-day wicket, with runs on offer, and the match isn’t going to be threatened by rain.