Welcome to day three of our live report of the second Test between England and New Zealand from Edgbaston. Join us for updates, analysis and colour. You can find our traditional ball-by-ball commentary here.

* Most recent entry will appear at the top, please refresh your page for the latest updates. All times are local Some more entertainment from Mark Wood, who put on a show on the second morning to reach 41 with some big hitting. This evening he took England into a five-run lead with a slog-sweep off Ajaz Patel over deep midwicket. Two fours off as many balls in Patel’s next over brought up England’s hundred but they were seven wickets down and only 15 ahead, although the home crowd appreciated his efforts. He’s still there, on 29* with Olly Stone 13*.

5.00pm: Make that two… and FIVE down for England

Dan Lawrence is caught behind for a two-ball duck! Neil Wagner is pumped after taking a wicket © Getty Images

Neil Wagner gets in on the act and England are really in trouble now. Ollie Pope reached 23 off 20 balls before Wagner pinned him on the knee roll with an inswinger. Pope reviewed but it was umpire’s call on impact and England are 58 for 4 still 27 runs adrift.

Henry gets his third after the tea break, Crawley goes lbw for 17!

4.15pm: Feasting on the atmosphere There was lobster on the media menu for the opening day at Edgbaston – not kidding. But Matt Roller has traded all that fine dining in to give you a flavour of what it’s truly like to be among real, live cricket lovers again – crustaceans, crayons, spice girls and all:

Countless column inches have been filled in the last 15 months about the prospect of a ‘new normal’ but at Edgbaston this week it has felt as though the old one has returned.

Some 7,000 fans per day returned to Lord’s last week, making the first Test England’s first home fixture played in front of supporters since the 2019 Ashes, but with three-quarters of seats still empty and the others filled primarily by becalmed MCC members, there was something missing in the spectacle.

Not so in Birmingham. Around 18,000 people have been allowed into every day of the second Test, meaning the ground is roughly 70 percent full, and they have made themselves known through beer snakes, giant inflatables, fancy dress and football chants. Read more here.

Matt Henry accounts for both England openers, meaning the hosts go to the break 18 for 2 still trailing by 67 runs. After he had Rory Burns out to a slips catch for a second-ball duck, Henry removed Dom Sibley, in similar fashion, caught by Daryl Mitchell at third slip for eight. Zak Crawley and Joe Root need to steady the ship. Well, well, Rory Burns falls for a second-ball duck. Matt Henry lures him into a drive and finds a thick edge that sails to Tom Latham at second slip. England are 1 for 0 in pursuit of New Zealand’s first-innings lead of 85. 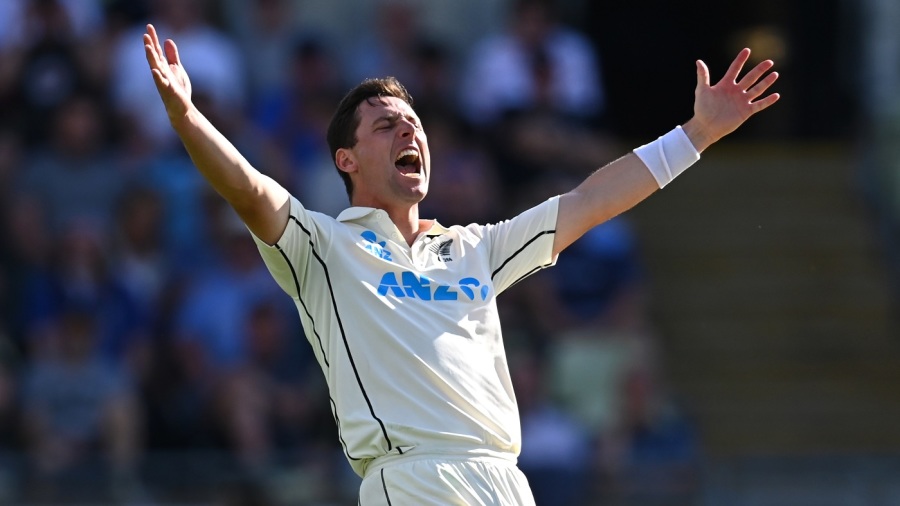 New Zealand all out for 388 and have a handy first-innings lead of 85 runs.https://t.co/qQc1V6pQCg | #ENGvNZ pic.twitter.com/A55k6WotFB

Joe Root swallows a slips catch to dismiss Tom Blundell for 34 off the bowling of Stuart Broad. The England captain held the ball like a lump of carbon he’d just crushed into a diamond and roared with delight directly at it to celebrate. Looks like that felt good after he grassed a straightforward chance off Olly Stone that would have dismissed Will Young for just seven yesterday. Young went on to score 82, one of three NZ batters out in the 80s and five batters in all for the match so far. 2.40pm: All about records for Anderson

And this is a beauty after Anderson, in his 162nd Test – an England record, dismissed Neil Wagner for a third-ball duck….

No bowler has dismissed more players for a in Test cricket than @jimmy9! #ENGvNZ pic.twitter.com/Z49aoKJ5Yi

Matt Henry falls with the lead just 50 runs and two wickets in hand for the tourists.

New Zealand lose their eighth, Mark Wood has his second!

James Anderson, playing his England-record 162nd Test, finally sees some reward, snaring the wicket of Neil Wagner for a third-ball duck. With the ball seaming back from outside off-stump, Wagner plays and misses, the ball hitting the pad and clipping the top of off to give Anderson his first wicket of the match. That whipped the crowd into a frenzy before they were momentarily hushed when Matt Henry was given not-out to Anderson’s lbw appeal three balls later, the decision upheld upon England’s review with replays showing he’d got bat to ball. 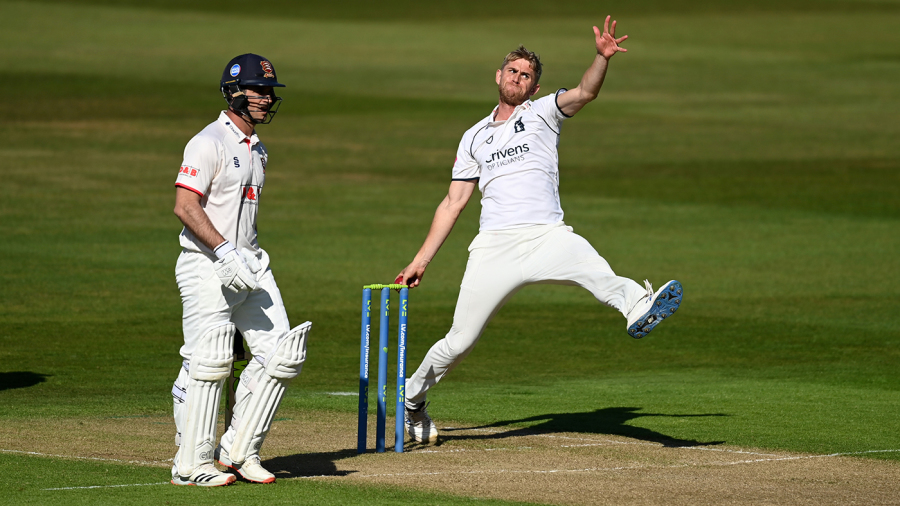 Olly Stone claims his second wicket, Daryl Mitchell pulling straight to Zak Crawley at midwicket for 6 to put NZ at 335 for 6, a lead of 32. Tom Blundell is not out 26 as Neil Wagner comes to the crease. Stone has 2 for 75. Time for lunch with New Zealand 23 in front and with five wickets in hand. Tom Blundell is unbeaten on 24 and Daryl Mitchell is not out 3. The tourists lost some momentum when Ross Taylor fell for 80 but England could have had at a couple more. James Bracey put down Blundell off Olly Stone when the batter was yet to score and Sam Billings spilled a catch off Taylor in the deep. Mark Wood got among the wickets © PA Images via Getty Images

Henry Nicholls had just been struck a blow to the helmet by a Mark Wood delivery travelling at 89mph. No sooner had he been given the all-clear to carry on, Nicholls gloved another from Wood down the leg side and James Bracey took a low catch. Earlier, Bracey had put down Tom Blundell, then on nought, off Olly Stone. Blundell is now 14 not out as Daryl Mitchell comes to the crease.

There’s been a record-equalling five scores in the 80s in this match, but no-one has made it past 82! https://t.co/YXMmm6LFRG | #ENGvNZ pic.twitter.com/f9V3NTImsU We mentioned earlier there might be more chat about the soft signal. George Dobell reports:

Stuart Broad has called for the ICC to “do away with” the soft signal following a controversial moment on the second day of the LV= Insurance Test against New Zealand at Edgbaston.

Broad was convinced that Devon Conway had been caught at slip by Zak Crawley when the batter had 22. But the on-field umpires were unsure and referred the decision to the TV umpire, Michael Gough, with a soft signal of not out. Gough subsequently confirmed that on-field decision despite replays suggesting Crawley had his fingers under the ball. Conway went on to make 80 and help New Zealand build a strong position in the game.

It’s a new ball, although that won’t bother James Anderson, and the sun is shining overhead, but look what we unearthed from when these sides met in 2008. Any chance we’ll see more of this? England “only” need seven more wickets too, Jimmy.

After a false start, Ross Taylor brings up his fifty with a deft sweep off Dan Lawrence. Taylor thought he’d hit the milestone on the previous ball when he appeared to edge onto his pad and fine through the leg side, but leg byes were given – to the batsman’s bemusement – and he had to wait a few moments to get there. No doubt at the second attempt though, he hit that soundly through the gap at leg gully. England cricketer-turned commentator Ebony Rainford-Brent has become an MBE in the Queen’s Birthday Honours list for services to cricket and charity. Rainford-Brent, who is commentating for Sky Sports on this Test, was recognised for her work with the African Caribbean Engagement (ACE) Programme, the organisation founded in January 2020 to engage young people from African and Caribbean heritage in cricket following a decline in the number of Black British professional players. She also spoke powerfully about her own experiences of racism alongside Michael Holding in a programme aired during Sky Sports’ coverage of the first day of the first Test between England and West Indies last summer.

Thanks @surreycricket Walked through your doors 27 years ago and haven’t left! A big part of my journey thanks for all the support over the years and hope to keep repaying your investment https://t.co/tfqxQmMUGw Hello again and it’s looking like being another intriguing day in this battle between New Zealand and England. You’d have to say the tourists have the upper hand with seven wickets in hand while they’re only 74 runs adrift of the home side’s first-innings 303. But Dan Lawrence’s part-time spin snared the wicket of Will Young for 82 on the last ball yesterday. Could that be the breakthrough England need? Or can Ross Taylor, on 46 though not looking at his most fluent, press on? Matt Roller was pretty impressed by what he saw from New Zealand yesterday, Devon Conway’s 80 in particular, while George Dobell‘s observations on England can be found here. And there’s sure to be plenty of chat about the soft signal again.