Among the many things Covid-19 did to Australian cricket was finally provide an answer to questions about how state teams might perform if asked to depart from the formulas they have honed over generations of playing games on extremely familiar home ground pitches.

For some, it was not so well: deprived of Bellerive Oval’s seaming surface, for instance, Tasmania failed to win any of their four games in the Adelaide hub, and were twice defeated outright. But for Queensland, the move away from similarly helpful pitches for pace was revelatory, both in terms of the burgeoning talents of the wristspinner Mitchell Swepson and the way the Bulls figured out how to use him.

Put simply, Swepson has been the most dominant bowling force of the Sheffield Shield this season, despite playing just four matches. In two of those, against Tasmania and South Australia, he was the reason Queensland were able to emerge with victory on the final day on slow but deteriorating surfaces. In the other two, he took the Bulls to within a wicket of beating New South Wales, also in Adelaide, and last week after returning from a neck injury he was shaping as the Blues’ major threat on the final day before rain intervened.

Swepson’s tally of 29 victims at an average of 22.44, an economy rate of 2.51 runs an over and a strike rate of 53.5 balls per wicket would be excellent going for a paceman; for a wristspinner in Australia, it is close to miraculous.

It also represents a similar sort of quantum leap in performance, given the opportunity to hone his craft away from the pace-friendly Gabba, to the one famously made by Marnus Labuschagne when he went to Glamorgan in the first half of 2019. Prior to this season, Swepson had only been able to bowl 20 overs or more in a fourth innings three times in his life. This summer he has more than doubled his experience of such scenarios, and the results are telling.

Just ask Jimmy Peirson, Swepson’s wicketkeeper and sometimes captain. “People ask me what the difference is and honestly I just think it’s his control,” Peirson told ESPNcricinfo. “He’s been able to land all six balls in a row where he wants them for long periods of time. I think about Shane Warne when he was bowling at his best, and it’s a massive call, but he was bowling with such great control there and I think Sweppo is bowling with equally as much control. “He’s certainly putting us in situations where we’re winning games on day four, where in the past our bowlers couldn’t get the breakthrough because of flat conditions or whatever it is. But he’s just providing a fantastic attacking option. He’ll bowl at the Gabba next year, he obviously hasn’t got much of an opportunity there because we weren’t there that much, but I think no matter what conditions he’s bowling in, he’s getting the job done for us. I’m so pleased for him. I think it’s a matter of time to when he gets his baggy green cap.”

The Warne call is, as Peirson puts it, a massive one, but the fact is that Swepson is actually doing better at Shield level than Warne was ever asked to before playing for Australia. Part of this is the fact that Nathan Lyon has been such a longstanding fixture in the Australia team, but also the hope that Swepson would, in time, evolve into a genuinely match-winning spin bowler who also had the control to keep a cap on the scoring of opponents when required. Though he had shown signs in 2019-20, Peirson is adamant that Adelaide was the Rubicon.

“It was this season in Adelaide. He bowled us to victory over Tasmania out at Park 25, and that was certainly the day I thought ‘oh okay, it’s starting to work for him, he’s starting to get it and it’s all coming together’,” Peirson said. “It was a perfect storm in terms of now tactically he’s switched on and knows what he’s trying to do. Skill-wise he’s bowling his best ball every time with control, and you could just see the intensity in his work and what he was doing. It was a coming of age for him and continued all the way through.

“He bowled beautifully against New South Wales in that game in Adelaide where we didn’t quite get the win but he almost got us to victory, then he bowled us to victory against South Australia at Glenelg on a deteriorating wicket. So that trip was where we felt ‘he’s starting to really get this’ and then he had his injury, he’s got through that and in Wollongong where it was a draw but he was well on the way to bowling us to victory there again. He’s not far away from cracking into the Australian team.”

Peirson has witnessed this transformation and at the same time evolved himself as a gloveman. He no longer frets over a few byes here and there when he knows that Swepson, by spinning the ball vast distances with the help of footmarks and ageing pitches, is giving Queensland the chance to win games that in years gone by would have petered out into high scoring stalemates.

“I can remember thinking last game in Wollongong, Sweppo was bowling into the footmarks to the left-handers and bowled a couple of absolute peaches, I let one go that I couldn’t do anything about and thinking ‘that’s the way it is’, and I was able to get a couple of great catches up to the stumps to Sweppo and really enjoyed the challenge,” he said. “Not many keepers get the opportunity to have a gun legspinner in their team who’s bowling with such control and spinning the ball so much.

“When someone comes to you and says ‘look, I want the ball, I want to do this job’, that as a captain makes you go ‘righto, you’re the man for it’. Sweppo’s at that point now where he’s really asserting his dominance on the game he’s playing in and I think it’s fantastic. Having more guys like that in the side is only going to breed a winning culture, and I think we’re starting to get that here in Queensland and we’re seeing that through the guys who are performing and it’s so exciting for us. It’s fantastic to be part of.” 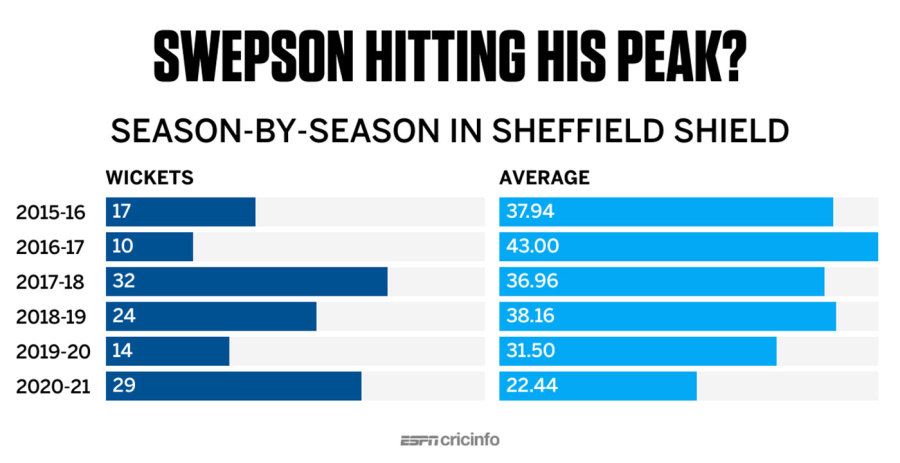 That mentality, actively wanting to be the bowler at the centre of things in the fourth innings of a game, is easier to talk about than to live. Even Warne, with all his prodigious gifts, had struggles with the concept, and Lyon’s are exceedingly well chronicled. Something for the Australian selectors to consider, at the end of a season in which India twice thwarted the hosts in the fourth innings of Test matches on surfaces offering spin but not much else, is whether Swepson’s wristspin would have posed a greater threat than Lyon’s off-breaks.

Certainly the numbers offer some clue as to the fact that Swepson is now deserving of a chance to be tried, not just as a second spinner overseas, but as the first-choice tweaker on fifth-day surfaces at home. One of Lyon’s strongest qualities – both a strength and a weakness – is consistency across a game. Essentially he poses almost as much of a threat in the first innings (105 Test wickets at 32.61) as the fourth (85 at 30.4) despite changing conditions. Should Mitchell Swepson be considered instead of Nathan Lyon? © Getty Images

By contrast, albeit at a lower level, Swepson is developing into a genuine strike bowler at the back ends of matches. The anecdotal evidence of huge turning deliveries like the ones he sliced through Daniel Hughes and Lachlan Hearne in Wollongong last week are backed up by the fact that over the last two seasons his bowling average across a game drops from around 46 (strike rate of 94.5) in the first innings to 20 (52.4) in the fourth. Swepson may offer something more to opponents early in a game, but as the hour of decision arrives, he is increasingly deadly.

What should also give pause to all those pondering Australia’s spin bowling options is how Swepson’s trend across a game follows that of R Ashwin, arguably the world’s pre-eminent spin bowler in the same era Lyon has occupied. Ashwin averages 28.90 and strikes every 62.4 balls in the first innings of a game, but by the fourth innings he becomes something far more dangerous, nailing an opponent every 45.3 balls at a cost of 19.13 runs apiece.

Australia, blessed with the extreme consistency of Pat Cummins and Josh Hazlewood in particular, should be able to afford thinking about a spin bowling option who can grow into a game when the seam and bounce the fast men thrive upon is starting to wane. All this is to say that when Swepson and Lyon face each other once more in this week’s Sheffield Shield final at Allan Border Field in Brisbane, there should be consideration of what there is to be gained from wristspin, now that it is clear the selectors have one of the requisite quality to be tried.

But a bit like how Covid forced the early rounds of the Shield to Adelaide and Swepson into the strike bowler’s role, it will take either some selection courage, or a drastic change of circumstances, to find out.