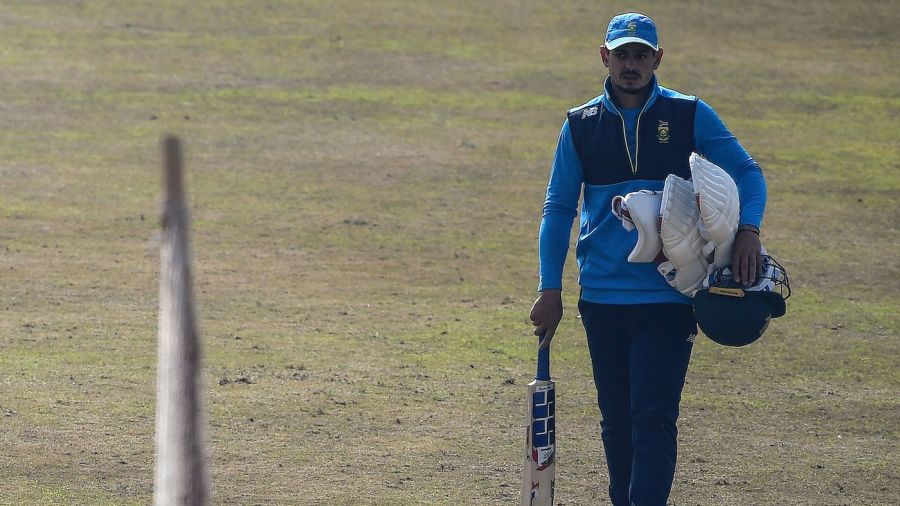 Quinton de Kock remains central to South African cricket’s plans although there is no indication of when he will be ready to play again.

De Kock is on a mental health break and did not take part in the recent CSA domestic T20 Challenge. He is unlikely to feature in the first-class competition this month, and has been relieved of the national captaincy in all formats.

“It was felt that the burden of leadership was just too much for a person or a player like Quinton,” said Graeme Smith, Cricket South Africa’s director of cricket. “We wanted to free him up.

De Kock was appointed South Africa’s white-ball captain last February, when Faf du Plessis was removed from the role, and asked to stand-in as temporary Test captain for this summer. He took them to a home series win over Sri Lanka, though his own form suffered, and then defeat in Pakistan, where his unease with the struggles of living in a biosecure environment and leading the team became apparent.

On the Pakistan tour, when it was announced that Australia had postponed their three-Test series in South Africa that was due to be played in March, national coach Mark Boucher said de Kock would be released from the burden of Test captaincy as soon as the international season ended. He did not discuss de Kock’s ODI or T20 leadership, but selection convener Victor Mpitsang and Smith have decided it is best for de Kock to also be freed from those roles.

“He hasn’t been fired,” Mpitsang said. “The agreement with Quinton when I got into the job was that we needed a Test captain, and it was just an interim job until after the Australian series, which never happened. Quinton probably feels that he needs to focus on his game. I wouldn’t want to see that as a burden because, at the time we made that decision. We’ve come to an agreement to say that he doesn’t need the captaincy any more.”

Asked what de Kock’s feelings around being stripped of the captaincy across the board was, Smith acknowledged it would have been tough on him.

“We have engaged with Quinton on this and the burden of leadership has been mentioned on a number of occasions. It required us to make a tough and important decision for South African cricket.”

Smith and Mpitsang have decided to split the captaincy between Dean Elgar (Tests) and Temba Bavuma (ODIs and T20s) because “we feel it’s a very difficult job to captain in all three formats,” Smith said. “The stresses on one man to do that, the workloads, the job in itself… we felt it was too much to give to one person.”

With no Tests scheduled for South Africa until the end of the year, Elgar will have to wait to begin his work, but Bavuma’s starts next month. South Africa host Pakistan for three ODIs and four T20s between April 2 and 16, and could be without several key players, who will be required at the IPL.

“That series is very important, especially the one-day series. It’s still the qualifying period for the 50-over World Cup. A few of the T20 players might have to leave earlier, but we’ll still have some players in the T20 side,” Mpitsang said.

It is not known whether de Kock will be back to playing at that time, be it for South Africa or the IPL and it is likely his availability will depend on medical advice. De Kock is contracted to the Mumbai Indians.