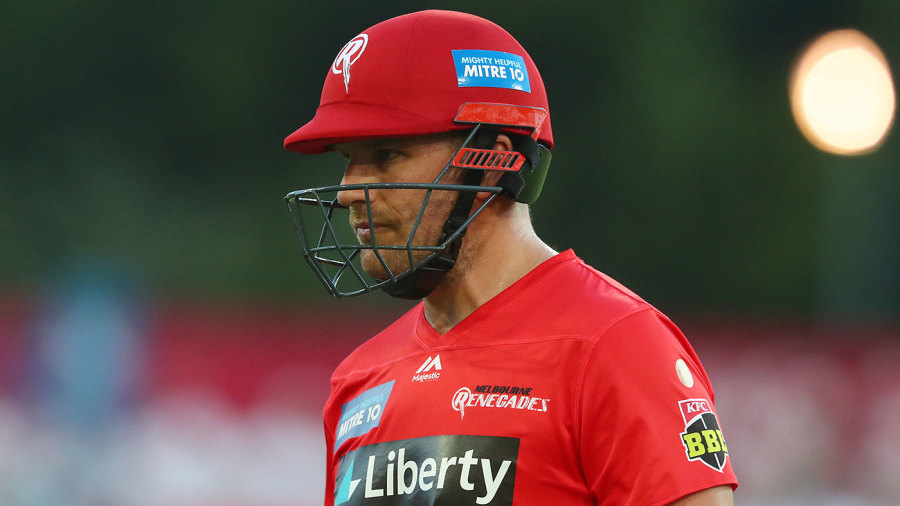 Australia’s T20 captain Aaron Finch believes players will need to be rested from tours moving forward as he thinks months on end in Covid-19 bubbles are unsustainable following a nightmare BBL season.

Finch will lead Australia’s T20 tour of New Zealand which departs Australia on February 7, one day after the BBL final.

The 18-man squad was announced on Wednesday, just a day after the final round of BBL season where his Melbourne Renegades claimed a morale-boosting consolation win over Hobart Hurricanes despite finishing last on the table for the second-straight year.

Finch scored just 179 runs at 13.76 from 13 innings and although he took full responsibility for his own form, he did concede the endless cycle of Covid hubs for touring Australian players had taken its toll on him.

“I had an absolute shocker with the bat,” Finch said. “The harder I trained the worse I got, which is the opposite to what everyone tells you to do.

“My wife worked it out the other day that I’ve had 20 or 21 days since April that I haven’t been in lockdown or in a bubble. I’m going down to the beach for a few days to relax. My kit bag won’t be coming out of my car, I can tell you. It will be locked away.

“We’ve got 14-days of quarantine and training once we get to New Zealand. That plenty of time. For me personally, it will be maybe four or five hits once I’m there and that should be good enough. I know what I need to do to get ready. Just a clear mind. That’s the most important thing.”

Australia will send two separate squads overseas to New Zealand and South Africa at the same time. The selectors have picked a first-choice Test squad for the tour of South Africa while Finch has a T20I squad without the experience of David Warner, Steven Smith, Pat Cummins, Mitchell Starc and Josh Hazlewood among others, but featuring some exciting prospects who had starred in the BBL.

But in the new post-Covid world where biosecure hubs are the new norm, Finch conceded that Cricket Australia may need to adopt England’s model of forcing multi-format players to rest from certain sections of certain tours, as England have done with the upcoming tour of India, in order to keep players fresh and at their best to avoid the type of form slump Finch has experienced.

“I think if you’re playing a few formats of the game, there’s going to need to be a chop-out from selectors and from Cricket Australia,” Finch said. “You notice what England is doing with their squads at the moment, there are guys that aren’t travelling for the first two Tests [against India], and then coming in.

“If the Covid bubble and hubs continue for a long time, that will be something that would be looked into, no doubt. The welfare of players is paramount and being locked up for months is pretty unsustainable I think, when you’re away from your families and your families can’t travel. “That will be individual as well. Some guys who are married with kids will find it tougher than a young single guy, for example. I think you just have to monitor everything in that regard.”

Australia allrounder and Sydney Sixers captain Moises Henriques, who was selected in the Test squad to tour South Africa has endured an unusual summer by comparison to Finch. He has been in hubs since October but has hardly played while being a squad member for the entirety of Australia’s four-Test series against India.

“To be honest, I don’t feel like I haven’t played much,” Henriques said. “When you’re away in that set up, when you’re away with the Australian team there’s a lot of external noise that you take in mentally. You’re constantly preparing to play each day and then you train. You don’t really have too many days off.

“I think a couple of days off here and there always helps the mind and the body. The other thing you’ve got to remember as well is for the last 10 years I’ve almost played cricket for 11 months of the year anyway. I think it’s almost a matter of a mindset personally. If I can reframe how I see things and how I want to look at things, it really determines whether or not I feel fresh or not.”

But Henriques was keen to stress that the players were well looked after in the various hubs and they did have the chance to opt-out at any stage.

“They’re all decisions that at the end of the day are mine,” he said. “If I am feeling fatigued or tired or whatever I don’t have to go on those tours if I really don’t want to. We’re not forced to go anywhere. It’s always the player’s decision. If I’m feeling exactly how I’m feeling now I’ll be welcoming any opportunity that comes my way.”