England look set to rotate their seam attack as they seek to win a sixth successive Test in Sri Lanka.

While England’s seamers performed admirably in the first Test, the team management are keen to ensure none of them are overworked ahead of the Test series in India as well as providing experience and opportunity to those who might not have played for several months.

To that end, England are considering replacing Stuart Broad with James Anderson, Mark Wood with Olly Stone and Sam Curran with Chris Woakes. Both frontline spinners, Dom Bess and Jack Leach, are set to keep their places with Moeen Ali forced to wait a little longer for a recall.

For Stone, in particular, it means a great opportunity. He hasn’t made it through an entire first-class game without suffering an injury since his only Test to date, a three-day win against Ireland in July 2019. Indeed, he has only played four first-class games since the end of the 2018 season having first suffered a stress fracture of the lower back in the Caribbean at the start of 2019 and a recurrence shortly after the Ireland Test.

He also only played one first-class match in 2017 after sustaining a serious injury to his cruciate ligament that ended his 2016 season the previous June.

There is not much doubting his quality when he is fit, though. He generates sharp pace, gains natural shape away from the bat and has a bouncer to hurry the best. Certainly Chris Silverwood, the England head coach, appears excited by him.

“Looking at we’ve got in front of us, we’ve got a lot of Tests in India as well and it’s highly likely there will be rotation and rests with the seamers,” Silverwood said.

“What we’ve seen from Olly is that he hits the deck hard and bowls at pace. He is getting better and better in the areas he is bowling and the understanding of what he’s trying to do and the plans he is putting in place.

“At some point we probably do need to get him into the attack if we can. He’s got to earn his way there, which he is doing. He’s working hard and doing everything we ask of him. It would be great to get some Test experience in him at some point.

“I am excited about him. If you look, we’ve Wood, Stone and Jofra Archer who can also hit 90-plus mph. I think it’s great to have that in your armoury.

“I’m not overly worried that he’s picked up a few injuries. Having been a fast bowler I know you do get injured. That’s why we need so many of them. I think as he gets older his body will harden to what he’s doing the more he does it. People mature into what they are doing.”

Silverwood has ruled out an imminent return to action for Moeen, though. Moeen tested positive for Covid-19 upon arrival in Sri Lanka and subsequently reported feeling mild symptoms of the virus. While he now appears to be fine, the protocols put in place for such cases demand a cautious approach.

“But Chris Woakes should be available for selection for this Test, all being well. He’ll be throwing his hat in the ring, I’m sure.” 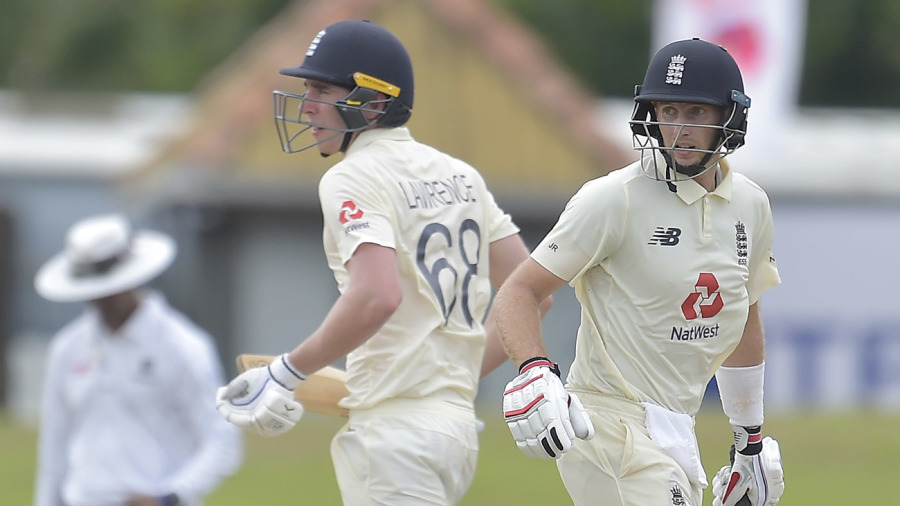 England posted their sixth 400-plus score in 12 Tests © SLC

While it’s clear sterner tests await for England, Silverwood did suggest it was no coincidence that his side had now won four overseas Tests in succession. In particular, it vindicates the gameplan he introduced when he was appointed coach ahead of the New Zealand tour at the end of 2019. At the heart of that is ensuring they score big totals in their first innings.

England have now posted first-innings scores of at least 400 in six of the 12 Tests they have played since Hamilton. To that can be added a second-innings of 391 for 8 declared in Cape Town and 369 against West Indies in the first innings at Old Trafford. Ahead of that Hamilton Test, England had not managed to score 400 in their 13 previous Tests.

“It’s not rocket science,” Silverwood said. “It’s exactly what I stated when I first came into the job really: big first-innings runs, put the opposition under pressure and skilful bowling.

“One of the things that we have done with the bat is we’ve scored 400 on many occasions: I think we’ve gone beyond 400 six times in 12 innings. I think that was the stat. With the ball, we’ve been relentless.

“It’s really not rocket science. It’s just becoming really, really good at doing the basics well and implementing the plans that we put in place that we said we were going to do at the start of the New Zealand tour in 2019, when the journey began.”

And does India’s success in Australia – and the increasing pressure on Tim Paine as captain – encourage him that England can regain the Ashes within the next 12 months?

“It’s nothing to do with me, Tim Paine’s captaincy,” Silverwood said. “But it’s always nice to see people in opposition teams under pressure, really. It shows that, if you do the basics well and get stuck in, we can beat them.”

Meanwhile, several of those players rested for the Sri Lanka tour fly to India from London on Friday. Among them are Archer, Ben Stokes and Rory Burns. They will be accompanied by Jonathan Trott, who is a batting consultant on the Test section of the tour, and Bruce French, who returns on a short-term wicketkeeping consultancy a few weeks after his departure from the ECB was announced.