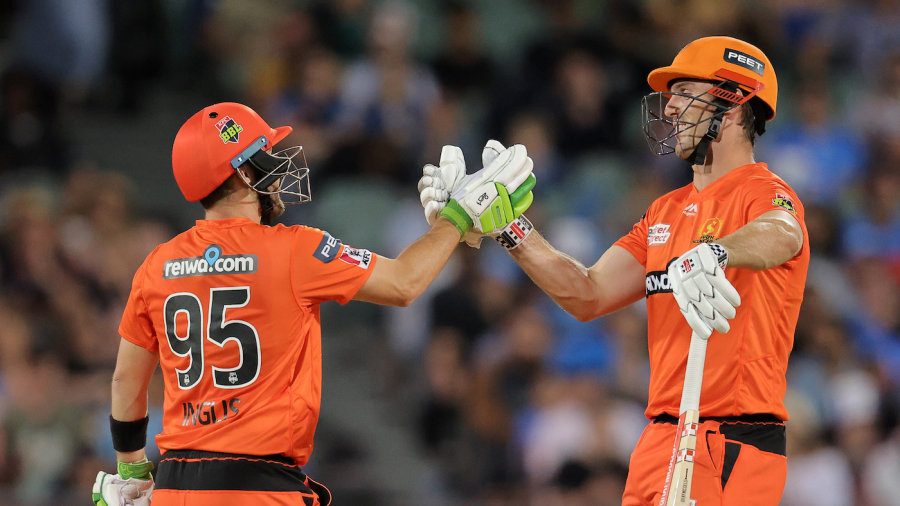 A sharp bowling spell from Jhye Richardson was backed up by a trio of brisk knocks from Jason Roy, Josh Inglis and Mitchell Marsh as the Perth Strikers secured their first win of the season, beating the Adelaide Strikers by seven wickets.

The Strikers never got any momentum with the bat or in the field after losing the toss and being sent in. Richardson struck in the first over to remove Phil Salt, and wickets fell regularly thereafter. Alex Carey top-scored with 82, but the inability of anyone to stay with him resulted in a cautious approach for the majority of his innings. Carey’s strike rate never went past 150 at any stage before Richardson returned at the death to claim him at deep midwicket, snuffing out any hopes of a needed flourish for the Strikers.

The Scorchers proceeded to chase the target in ruthless fashion, first with Roy at the top of the order and then as Inglis and Marsh helped the side recover from a brief hiccup to secure the bonus point and the full result.

No help for Carey
The Strikers captain looked in good touch early in his knock after arriving in the third over following the dismissals of Salt and Jake Weatherald. After a slightly slow start reaching 10 off 11 balls, he found his rhythm against Andrew Tye in the seventh over, driving him through extra cover off consecutive balls to start the over before a cut shot brought his third boundary in a five-ball sequence. Another lofted drive off Marsh to end the eighth over kept the runs flowing for Carey, and Strikers looked solid at 64 for 2.

But when Matt Renshaw fell to start the ninth over on a leading each to mid-on for Aaron Hardie’s second wicket, Carey started to go into a shell. The indecisive approach played a part in the run-out of Jonathan Wells in the 10th, as a drive from Carey was cut off by Roy at extra cover, who relayed to the striker’s end where Wells had sacrificed himself to allow Carey to keep going.

However, Strikers went through a 25-ball sequence without a boundary from the 11th to the 15th over. Three balls after Carey brought up his half-century off 42 balls, he broke the streak by driving Fawad Ahmed through cover for four. But the hope of getting back into his early free-flowing mode was dented by the dismissals of Rashid Khan – uppercutting to third man – and Danial Worrall – a skier to mid-on – in subsequent overs. Running out of partners, Carey finally called for the Power Surge to start the 18th. After being dropped by Fawad on a straightforward chance at short third man on 69, he cracked Tye for four and six but perished next over to Richardson as Scorchers kept the momentum heading into the break. Richardson’s key breakthroughs earned him Man of the Match honours.

Roy Rolls
The England opener was a battering ram at the top of the order for Scorchers, scoring 27 of the first 28 runs in the chase. He continued to dominate an eventual 57-run opening stand with Liam Livingstone, ending with seven fours and one six.

Roy’s confidence was best displayed immediately after the Powerplay in the fifth over against Rashid. Without hesitation, Roy reverse swept Rashid’s first ball for four, not allowing the star leggie a chance to get settled. Roy cracked a short ball for a front-foot six next over off Worrall, and looked set to bring up a half-century before he was undone by a slightly back of a length ball from Wes Agar in the eighth over. Trying to flick to midwicket, a leading edge popped up to Rashid at cover to end his knock. Agar claimed Livingstone two balls later, getting some extra bounce once again to induce a prod away from the body and an edge behind.

Inglis and Marsh seal the deal
Strikers were trying to rally back into the game first by denying the Scorchers the Bash Boost Point. Worrall had bowled a tidy over in the 10th, conceding five off the first five balls. Needing a boundary off the last delivery to get the bonus point, Inglis pulled Worrall off his hips past deep fine leg for four. The moment seemed to give the Scorchers an added lift heading into the second half of the chase.

Though Rashid claimed Colin Munro lbw on a mistimed sweep in the 11th, Marsh and Inglis showed they were not content to play conservatively for singles to coast across the line. Marsh heaved Agar for six in the 14th over midwicket, then punched him over mid-off for four to bring the required run rate under a run a ball.

In a somewhat surprising move, they then took the Power Surge to start the 16th, signalling their positive intent. Inglis then cut Agar’s first ball in the sequence for four before Marsh flicked two misdirected yorkers through fine leg for another pair of boundaries. Inglis then iced the game with consecutive drives off Danny Briggs over cover and back down the pitch in the 18th to end the match with 14 balls to spare.