The ICC has suggested teams would need to exercise caution over bowlers’ workloads to avoid a serious injury like stress fracture of the spine as players get ready to resume training after nearly 10 weeks in lockdown due to the Covid-19 pandemic.

With international teams set to return to play in a “condensed schedule”, the ICC has recommended bowlers would need minimum training periods ranging from 5 to 12 weeks – based on the format – to build the workload necessary for peak performance.

Following are the minimum preparation periods the ICC has recommended for bowlers returning to the three formats:

On Thursday, England became the first major nation to restart training with 18 bowlers returning to individual training. England have approximately seven weeks to prepare for the three-Test series against West Indies, which is likely to start on July 8. The three Tests are scheduled to be played back-to-back with a three-day break between matches in bio-secure venues, and the ECB has said they may have to rotate their fast bowlers to get through a “pretty brutal” schedule.Stuart Broad has already trained twice at Trent Bridge, bowling five overs at a set of stumps on the outfield on Thursday and another six on Friday, when he said he was bowling at 70% intensity.

The ICC said “age and physical preparedness” are two key elements as players built their bowling loads. “Bowlers are at a particularly high risk of injury upon returning to play after a period of enforced time-out,” the ICC said on Monday while releasing a document titled ‘Guidelines for resumption of cricket’ which listed various dos and don’ts for cricket at the international, domestic and community level. “When looking at timescales, consideration needs to be given to the age and physical preparedness as this will influence the risk and length of time required to develop appropriate bowling loads that will allow a safe and effective return to international cricket.”

According to its research the ICC has said the bowler can see a “2% bone loss” in the spine if the player has been seven weeks in shutdown. “Evidence suggests long-term workloads over 1200 overs, older bowlers, > 24yrs and reducing spikes in load have some protective elements in relation to stress fractures, the most significant injury in relation to time-loss. However, these figures have not been seen in conditions where such an enforced period of lock down has been noted. Research suggests a seven-week period of shut down can see 2% bone loss in the spine that takes up to 24 weeks to replace.”

The ICC has advised team to travel with “larger” squads to not only compensate for the absence of net bowlers provided by the host country, but also to offset any injuries to the first-choice bowlers. “With the likelihood of a return to international cricket potentially resulting in a condensed schedule it will be necessary for countries to utilise larger squads to safely meet the performance demands imposed.” 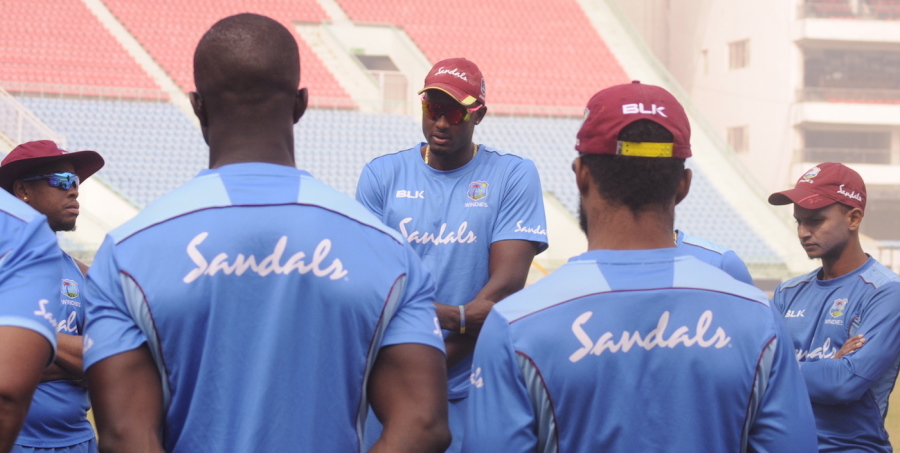 Jason Holder and his team-mates will have only a month to prepare for their series against England, as per the current schedule © CWI Media/Philip Spooner

As it happens, England’s bowling group comprising 13 fast bowlers, have just about seven weeks to get ready for the West Indies Test series. Jason Holder’s men will have even lesser time as they are expected to land a month before the first Test. The ECB are confident their plans, put together by their own team of medical professionals, are “more than sufficient”.

The ICC pointed out those periods “would be dependent on the bowler having been able to undertake regular running and some bowling drills whilst in lockdown. “These are dependent on a multifactorial assessment with age of bowlers, injury history, bowling technique and speed and lifetime overs, amongst others. Bowling loads therefore need to be developed progressively, with adequate rest built into a return programme and based on match intensity overs per week.”