6:22 PM GMT The PCB has confirmed a massive change to their policy, allowing both international and domestically contracted players to take part in a maximum of four T20 leagues a year, including the PSL. The earlier policy, which was introduced in 2018, had restricted player participation in several leagues, but as ESPNcricinfo reported last month, the PCB decided to put it up for review for the very first time….

4:52 PM GMT ESPNcricinfo staff Leicestershire have announced that board director Sean Jarvis will become their new chief executive in June following the departure of Karen Rothery after only 12 months in the role. Jarvis will take up his new position on June 24 after completing a 14-year stint at Huddersfield Town FC, where he was commercial director. “The county is in my DNA and I am honoured to be…

2:16 PM GMT Dane Piedt, the nine-times capped South African Test offspinner, still harbours hopes of playing at a 50-over World Cup, albeit not for the country of his birth. Piedt will move to the USA in the next few months to be part of the new Minor League T20 tournament, which is due to launch this summer, ending his career at home. And he intends to meet qualifying criteria… 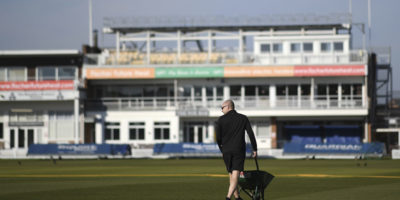 County groundsmen will have plenty of time to prepare their pitches for the summer © Getty Images The COVID-19 (novel coronavirus) pandemic has led to the start of the English season being put back until at least May 28, and left many counties facing a potentially damaging shortfall in finances. How has your club responded to the situation? Here we will keep track of ongoing developments. Derbyshire The club has…

10:36 AM GMT ESPNcricinfo staff New South Wales allrounder Moises Henriques and Victoria batsman Nic Maddinson have been jointly awarded the Sheffield Shield players of the 2019-20 season. The duo pipped Shaun Marsh and Peter Siddle, who were also in the running. This is the first time that either of the two has been chosen for the honour. Henriques was the second-highest run-getter for his side with 512 at 51.20,…

3:45 AM GMT Steve Baldas, the Adelaide Strikers general manager, is among 16 members of staff and seven contractors made redundant by the South Australian Cricket Association (SACA) as it became the first state cricket association to reduce the size of its operation amidst the coronavirus pandemic. The SACA’s cost-cutting, announced to its members on Thursday night, is linked to the vast downturn in projected revenue for the Adelaide Oval…

6:01 PM GMT ESPNcricinfo staff Ollie Rayner, the offspinner who won the County Championship with Middlesex in 2016, has confirmed his retirement from cricket at the age of 34 after his release at the end of last season. Rayner, a tall spinner with an orthodox action, took 51 wickets at 23.56 in Middlesex’s title-winning team in 2016, but was consigned to a holding role in the following three seasons and…

5:04 PM GMT Iain O’Brien, the former New Zealand fast bowler, has launched a funding page in a bid to return to his family. O’Brien, who now lives with his wife and two daughters near Matlock in England, was visiting his parents in New Zealand when the COVID-19 (novel coronavirus) pandemic struck. While he has already booked three flights home – some of them eye-wateringly expensive – the airlines subsequently…

3:45 PM GMT A large section of Bangladesh’s professional cricketers fear they will miss out on their entire income if the Dhaka Premier League doesn’t continue for the rest of the season. Around 60 players from the league, who are not on BCB’s payroll for the central contract or the first-class contract, face an uncertain future due to the COVID-19 pandemic that has stopped cricket in the country. The BCB…

3:41 PM GMT ESPNcricinfo staff England women cricketers Lauren Winfield and Amy Jones are both stuck in Australia with worldwide travel restrictions in force due to the coronavirus pandemic. Winfield was in Hamilton Island on the Great Barrier Reef, celebrating her honeymoon after her marriage to long-term partner Courtney Hill. Jones was in Perth. Both have found themselves stranded in Australia, and are currently unable to return home with borders…