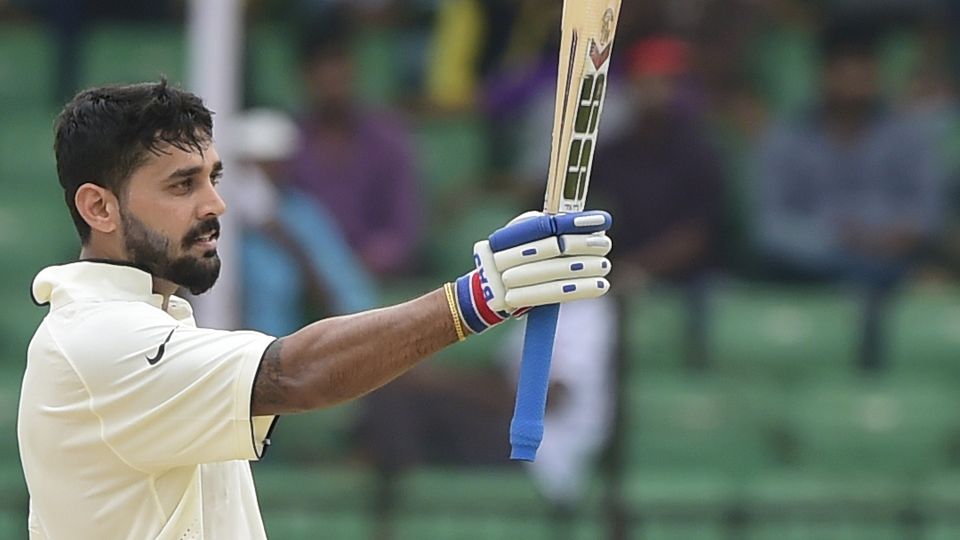 Dasgupta: Unfortunate for KL Rahul to miss out

In deference to the Indian team management’s wishes, there was grass on the Feroz Shah Kotla pitch, but Virat Kohli, at the toss, wished there could have been more. It certainly wasn’t enough to turn New Delhi into Newlands, and India, instead of fighting for survival against snarling South African fast bowlers, settled into a typically subcontinental bat-first, bat-big pattern against a limited Sri Lanka attack, facing more spin (59 overs) than seam (31) on day one.

For most of the day, Sri Lanka had nothing to cheer as M Vijay and Virat Kohli added 283 for the third wicket, their partnership an exhibition of relentless self-control and a hunger for runs that never tipped over into greed. India rattled along at more than four an over, and as the shadows lengthened it seemed as if India would end the day only two down.

But wristspin can do strange things, and Lakshan Sandakan, whose figures at that point read 20.5-0-109-0, sent down a deliciously flighted wrong’un, slanting across Vijay and asking him to reach out to drive. He didn’t pick the direction of turn, groped for the ball, and missed, dragging his back foot out of the crease in the process. Niroshan Dickwella, quick and nimble, did the rest.

In his next over, Sandakan repeated the trick against Ajinkya Rahane. The line was a little wider this time, but again the ball landed on that perfect length, broke in the direction the batsman did not anticipate, and again Dickwella removed the bails with the batsman’s toe on the line. India had gone from 361 for 2 to 365 for 4. Sandakan, whose bowling until that point had made Sri Lanka yearn for the control of the absent Rangana Herath, was now doing what he had been picked to do.

Still, though, this was India’s day. At stumps, Kohli was batting on 156, his third hundred in a row and the quickest – he only took 110 balls to reach three figures – of his 20 in Tests. In the process, he also became the fourth-quickest Indian batsman to 5000 Test runs, getting there in his 105th innings.

Until the moment of Sandakan’s transformation, Vijay and Kohli had looked utterly secure. Aside from a couple of clearly not-out lbw shouts, their dominance had gone unchallenged, and, in an indictment of the two specialist spinners, the one bowler who had come remotely close to creating chances was the part-time offspinner Dhananjaya de Silva.

On 122, Vijay drove early and sent the ball looping towards midwicket rather than the intended direction of cover; it fell just short of the diving Dinesh Chandimal. Then, on 154, he sent an uppish flick in the same direction. This time it eluded the fingertips of the debutant Roshen Silva. In between, de Silva also found Kohli’s leading edge, which fell in no-man’s land between the bowler and mid-off.

Bowling exclusively from round the wicket, de Silva ended the day with figures of 0 for 45 in 15 overs. Sandakan and Dilruwan Perera finished with a combined 2 for 207 from 44 overs.

The foundation of Kohli’s innings was his supreme reading of the spinners’ length, and thereafter his footwork to pounce on marginal lapses. Before lunch, for instance, he took a massive stride out to a good-length ball from Lakshan Sandakan and bisected wide mid-on and deep midwicket with a whip of his wrists. On 68, he went the other way, deep into his crease, to shorten the length of an otherwise decent Dilruwan Perera delivery and bring his wrists into play once more to find the gap between short fine leg and deep square leg.

For the quicker bowlers, a “good” length was a fairly small area on this pitch. When they strayed remotely off that area, Kohli and Vijay were quick to put the ball away. Vijay gave a good demonstration of this with a pair of boundaries in the 23rd over, off Lahiru Gamage: a cover drive followed by a wristy on-drive, both off balls that were far from half-volleys. Kohli, meanwhile, raced from 43 to 55 courtesy three fours off one Gamage over, the pick of them an on-the-up drive through the covers.

Vijay went to tea on 101, and resumed with a flurry of attractive boundaries – an inside-out cover drive off Dilruwan, a square-drive off Gamage, a reverse-paddle off Dilruwan. He would only hit one more four after that, though, as he took the singles on offer and made sure he would do everything in his power to keep his quest for that long-yearned-for maiden double-hundred alive. This time, it would really take a good ball to get him out.

This hadn’t been true of Shikhar Dhawan and Cheteshwar Pujara, who both got off to breezy starts before falling against the run of play.

Once it became clear there was little help in this pitch for the quicks, Dhawan and Vijay were quickly on their way, driving freely on the up and hitting eight fours in the first ten overs. Sri Lanka brought on spin as early as the eighth over, and Dilruwan continued to worry his team with his inconsistent lengths, Dhawan picking up two fours behind point in his first two overs. But he grew a little greedy, and picked out deep square leg with a top-edged sweep on 23. Suranga Lakmal briefly lost the ball in the hazy atmosphere, and lost a shoe while hurriedly changing direction, but managed to hold on to the ball.

It was Dilruwan’s 100th Test wicket. He might not be the most frugal of spinners, but he has the knack of taking wickets – his 100th had come up in his 25th Test, and no Sri Lankan had got there quicker. Muttiah Muralitharan had taken 27 Tests.

In walked Pujara, whose last four partnerships with Vijay read 107, 178, 102 and 209. They seemed to be continuing from where they left off in Nagpur, while scoring twice as quickly, and Pujara in particular was putting the bowlers through the shredder, hitting four fours in the space of three overs, including two back-foot whips off marginally short balls from Dilruwan. But this time the partnership would only get as far as 36.

Lahiru Gamage broke it, Sri Lanka profiting from the same plan that had brought them Pujara’s wicket in the second innings in Galle in late July. Then, he had flicked a full ball from Lahiru Kumara to leg gully. Now, he tucked one off his legs in the same direction, just uppishly enough for Sadeera Samarawickrama to take a sharp catch falling to his left.