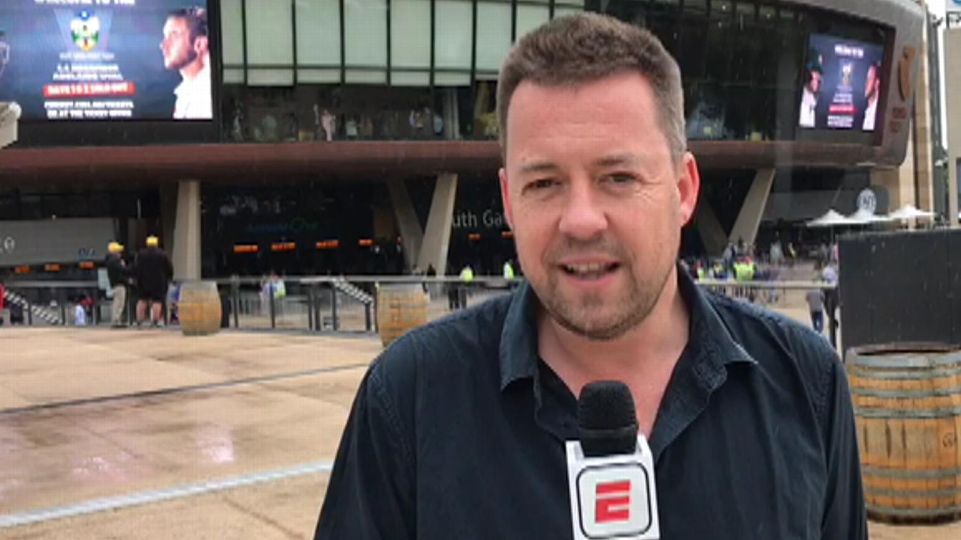 Dobell: Root was let down by senior bowlers

Usman Khawaja brought up the second half-century of his Ashes career as Australia progressed steadily on a rain-affected opening day at Adelaide Oval. At the dinner break, Khawaja was on 53 and Steven Smith had moved along to 25. Australia had reached 2 for 138, but England had missed a golden opportunity to have them three down when Mark Stoneman dropped Khawaja in the deep on 44.

Such chances could hardly be let slip after Joe Root took a significant gamble by sending Australia in, thus becoming the first captain in any day-night Test not to choose to bat first. Root said he wanted to give his fast bowlers use of the overcast conditions but Smith said he would certainly have chosen to bat on the hard Adelaide Oval surface, and it took an outstanding piece of fielding for England to make their first breakthrough.

After the opening session was reduced to 13.5 overs due to persistent rain, the Australians resumed on 0 for 33, and it took only four balls for England to strike. David Warner pushed Stuart Broad towards cover and a misfield from Moeen Ali resulted in Warner calling Cameron Bancroft through for a single. However, Warner changed his mind and Bancroft was caught short at the non-striker’s end by a direct hit from Chris Woakes.

It was just the boost England needed after the openers negotiated the new ball with few problems. There was some swing and seam movement for Broad, Woakes, James Anderson and debutant Craig Overton, but the Australians left effectively and few balls threatened the stumps.

The loss of Bancroft brought Khawaja to the crease, and after he fell early to the offspin of Moeen Ali at the Gabba, it seemed likely that Root would call on Moeen quickly once more. However, by the time Root did so, Khawaja had already faced 26 balls and was reasonably settled in; he took no time in advancing to Moeen and lifting him over mid-off, and the spin demons that looked like they might follow Khawaja this series were soon exorcised.

But England’s bowlers persisted and Woakes earned the next wicket when Warner, who had worked patiently for 47 from 102 balls, flashed at one he might have left alone and edged behind to Jonny Bairstow. Australia were 2 for 86, but arriving at the crease was the man who troubled them most at the Gabba: Smith.

Smith found himself challenged by England’s bowlers, particularly Broad in a gripping mini-contest that involved more than a few exchanges of words. But Smith survived and by the dinner break his partnership with Khawaja had reached 52 balls.

Khawaja brought up his fifty late in the session from his 89th delivery with a cut for four off Moeen through third man, having been given a life on 44 when he top-edged a hook off Woakes and saw Stoneman put down the very gettable chance in the deep. It left England with much work still to do if Root’s decision at the toss was to be justified.