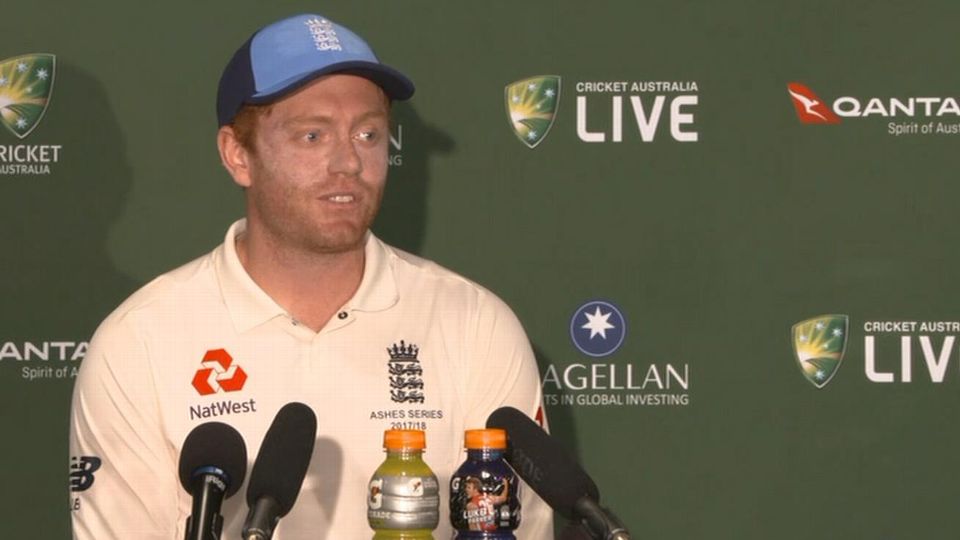 Bancroft incident is blown out of proportion – Bairstow

Whatever Cameron Bancroft envisaged when he imagined the first press conference of his career as a Test cricketer, it surely wasn’t this.

His excellent debut, in which he scored 82 not out to help Australia to a 10-wicket victory, was all but forgotten as he was besieged by questions about the incident involving Jonny Bairstow in Perth a month ago.

It was, at times, surreal stuff. Asked to define “on a scale of one to 10” what sort of a headbutt he received from Jonny Bairstow, he found himself using the memorable phrase “I’ve actually got the heaviest head in the Western Australia squad; it’s been measured.”

A series of England press conferences had brought only more confusion. The more they (Bairstow, Joe Root and an utterly bemused Trevor Bayliss) insisted “we’ve made it quite clear”, the more the truth was shrouded in a fog of vague platitudes that begged more questions than they answered. They might as well have got David Blaine to talk to the media. It was, for the most part, like trying to get a straight answer from a politican.

But Bancroft is an uncomplicated, old-fashioned, straight-talking Aussie. And, without too much fuss, he let the light flood in. Australia won the first Test on and off the field.

This, it transpires, it what happened: a few hours after England landed in Perth on September 29, several of the squad went out for drinks. There was no curfew and they were accompanied by security officers.

Bairstow, like an over-excited puppy, greeted Bancroft with a well-meaning but clearly inappropriate butt which connected with the side of Bancroft’s forehead. While Bancroft was surprised – “It was really weird and random. I expected a handshake or hug, not a headbutt” – he was not offended or threatened. At no stage was the action interpreted as aggressive and the two carried on chatting and drinking.

It is a version of events that has, more or less, been accepted by Bairstow.

It came to light on Sunday after some dialogue was picked up by stump microphones. The Australia team brought it up in the belief they could disconcert Bairstow when he came out to bat. It worked like a charm, too. He was caught at third man attempting an uppercut.

Not for a moment should anyone conclude that the Australian on-field talk represents their genuine belief that Bairstow assaulted anyone. It was, as Steve Smith, admitted a tactic. “We were just trying to get into his head,” Smith said. “And I think it worked.” They didn’t, they insist, intend for it to leak into the media. Though you get the impression they are not too concerned that it did. England’s discomfort will delight them.

Wait there, you’re thinking. Bairstow said hello with a headbutt?

Well, yes. Not an especially violent one and certainly not one meant to hurt, but yes, he did. In a clumsy, macho, possibly even jet-lagged way, he did. Like a “jock”, as they might say in the US. It is an almost inexplicably strange greeting, it is true. Unless, perhaps, you are a stag.

Perhaps you have to know the characters involved to understand. Those who do – the media and players see a lot of each other these days – describe Bairstow as a well-meaning, likeable but perhaps slightly socially awkward fellow. Think of Alan Partridge trying to fit in with “the blokes” in the episode entitled “Watership Alan” (“I had breakfast; didn’t even wash my hands. Cos I’m a bloody bloke”) or James Fleet’s character, Tom, in Four Weddings and a Funeral attempting to emulate the gentle wit of Hugh Grant’s best man’s speech and inadvertently causing great offence (“When Bernard told me he was getting engaged to Lydia I congratulated him because all his other girlfriends were such complete dogs. Although may I say how delighted we are to have so many of them here today”). Jonny Bairstow explains his side of the story © Getty Images

Nobody involved in this situation – not Bancroft, Bayliss or Bairstow – thinks there was any malice involved. It would be odd if any of the rest of us reached a different conclusion.

Bairstow will probably be embarrassed by this episode for some time. “Just don’t say hello to me,” someone shouted at him in mock horror in the hotel lobby on Monday. He greets harder than Audley Harrison hits, after all. But really, apart from providing material for some gentle teasing for years to come (he’ll be the butt of jokes, you would imagine), this incident doesn’t amount to very much. Bairstow, who shook hands with every member of the Australia squad and backroom staff after the match, will not be disciplined and should surely be allowed to move on.

There is a more serious element, though. Trevor Bayliss, as laid back an England coach as there has ever been, was clearly seething at the fact such an incident had – albeit briefly – destabilised his team. Within a couple of minutes, he used the words “stupid”, “dumb” and “extra dumb” to describe the off-field behaviour of some of his players in recent times. He couldn’t give a damn what they get up to in their spare time, just so long as they don’t do anything that could, in any way, compromise their on-pitch performance.

And, the way he sees it, this episode helped Australia dismiss Bairstow in England’s second innings – he played a poor, flustered shot – and increased the media pressure on his squad. It has fuelled allegations there is a “drinking culture” within the squad – an allegation with which few of those of us who travel with them agree – and increased the level of scrutiny and pressure which will stalk them with its long lens.

The result? England may move a step closer to a siege mentality they have done well to avoid in the aftermath of the Stokes incident. They have, until now, continued to mingle and mix and enjoy the many delights of this wonderful country. It would be a shame – a self-defeating shame, probably – if they were to put up the shutters and stop embracing all that life offers here. Month upon month of hotel room living is not the definition of professionalism; it encourages insularity and brooding and staleness. As Bob Dylan put it: too much of nothing makes a man mean.

This England side has been admirably open in recent times. They have posed for every selfie and accepted nearly every media request. The culture has been more relaxed, happier and lighter and, surely as a direct consequence, less plagued by the mental health problems that had a significant impact on the 2013-14 Ashes tour. It would be a shame if an odd incident like this – not much more than shaking hands with a girl who expects a kiss on the cheek or knocking over a glass of wine at a wedding – were to spoil it.