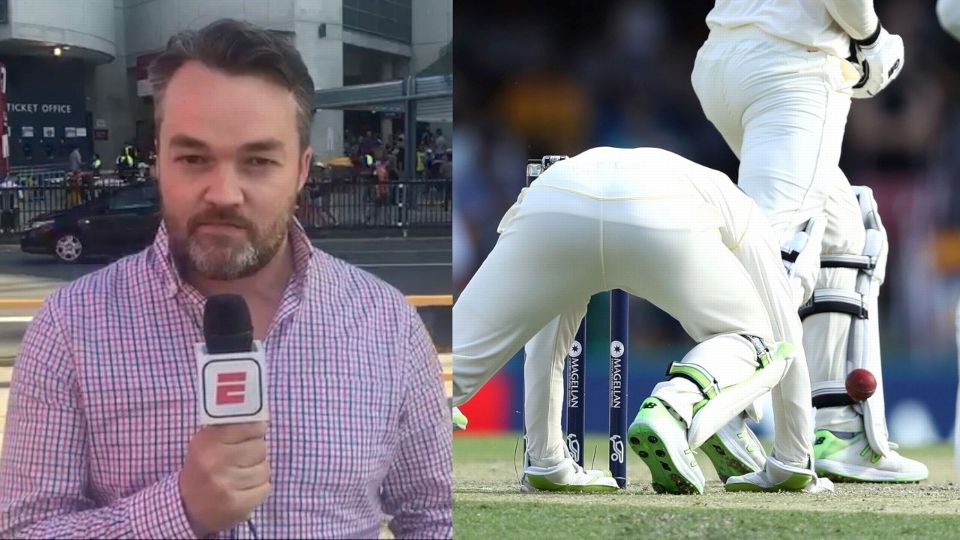 ‘Mixed selection messages mean all eyes on Paine after drop’

When England’s Ashes tourists were dubbed the “Un-name-ables”, it was the likes of James Vince and Mark Stoneman whom the detractors would have had in mind – if only they could have picked them out of the crowd. Two first-time visitors to Australia, with a solitary half-century from ten previous Tests between them, their reputations were so lowly that they could only get better, or so the selectors’ logic would have you believe.

But lo and behold, by the close of another frenetic, absorbing first day at the Gabba, Vince had replaced that blanked-out question mark on his profile page with a perfect array of no-filter cover-drives, while Stoneman – in reaching his fifth consecutive half-century of the tour – had announced himself as the sort of imperturbable left-handed nugget upon whom English Ashes victories Down Under have recently been founded.

But before anyone starts to equate Vince’s elegance with Michael Vaughan’s tour de force in 2002-03, or Stoneman’s insouciance with Chris Broad’s and Alastair Cook’s efforts in 1986-87 and 2010-11 respectively, it’s worth taking a second look at a scorecard that confirms how hard England were forced to scrap.

Despite enjoying periods of rare dominance in the midst of a second-wicket stand of 125 that, remarkably, outshone any England partnership at any stage of their dismal last visit in 2013-14, England started and finished the day in a rare old scrap – first with Mitchell Starc exploiting once again Cook’s weakness against quality left-arm seam to bag him for 2 in the third over, and then in the twilight, as Nathan Lyon in particular backed up his extreme pre-match lippiness with one of the finest wicketless spells of first-day offspin ever witnessed in an Ashes contest.

Lyon did, however, produce the single most significant moment of Australia’s day – a pinpoint pick-up-and-shy from the covers to run out Vince for a career-best 83. It was the opening that his side desperately needed, and while may not have been fully exploited before the close, the loss of Joe Root, lbw to the persevering Pat Cummins for 15, did leave Moeen Ali and Dawid Malan clinging on to the close. They did so in a gutsy 33-run stand, but when play was controversially suspended moments after a tight lbw appeal from Starc against Malan, the day’s honours were more or less even at 196 for 4, even if Australia’s second new ball was a mere three deliveries old.

Two of the foremost members of England’s squad of “Un-name-ables” made their presence known in no uncertain terms on the first day of the 2017-18 Ashes, as Mark Stoneman and James Vince marked their Ashes debuts with a second-wicket stand of 125 that, incredibly, surpassed anything that their forebears achieved on England’s last fateful visit to Australia four years ago.

Although Stoneman’s dismissal, in the closing moments of the afternoon session, redressed the balance a touch, he still departed with a Test-best 53 to his name, and at least a half-century in each of his innings on the tour to date. At the other end, Vince remained unmoved on 72, his maiden Test half-century, with Joe Root joining him for a torrid pre-tea examination against a pumped-up Pat Cummins, who appeared to be finding some handy signs of reverse swing.

Nevertheless, the efforts of two of England’s Ashes rookies had gone a long way towards cauterising those lingering memories of English trauma on the 2013-14 tour. In fact, it hadn’t been until the final 15 minutes of the afternoon session that a genuine opportunity did come along, but when Tim Paine – recalled as keeper for his first Test in seven years – let a fat nick off Vince, then on 68, hit the turf, Australia’s prospects appeared to be heading in a similar direction.

In pinging back Stoneman’s off stump with a scorching round-the-wicket delivery, Cummins served a timely reminder that Australia can never been written off for long. All the same, it had up until that point been an extraordinarily composed and chance-free alliance – and in fact the first time since 1903 that two Ashes debutants had produced a century stand in their first innings.

Vince and Stoneman had been brought together as early as the third over, following Mitchell Starc’s removal of Alastair Cook for 2, but, all told, their partnership spanned 52 overs as well as a lengthy rain delay that pushed the tea interval back by an hour and 20 minutes, and effectively forced them to make two separate starts to their innings. But at the culmination of a month of ceaseless Ashes hype, crowned with a week of the purest trash-talk in Brisbane, the manner in which they drew the sting of the most feared Australian venue of them all was inspiring, and at times distantly reminiscent of England’s famous second innings on this ground in 2010-11.

Under overcast skies and with palpable humidity in the air, there might have been a hint of a temptation for England’s captain, Root, to bowl first after winning the toss – not that such a course of action is remotely acceptable in Ashes contests these days, given what happened when Nasser Hussain went down that route in 2002-03.

Instead, Root trusted in his untested top order to deliver the goods, and from the moment the shine went off the new ball and the sluggish nature of Kevin Mitchell Jr’s final Test wicket was fully revealed, he was utterly vindicated in his faith. Only Nathan Lyon, who served up 15 canny and probing overs of offspin, was able to find much in the wicket to his liking, but with only four Australian bowlers on rotation, there always seemed to be a pressure-relieving moment at the other end.

With Stoneman showcasing excellent judgement outside off, the eye-catching strokeplay was at first left to the recalled Vince, whose Test career had appeared dead in the water when he was dropped after the 2016 home summer, with 212 runs at 19.27 to his name.

The selectors evidently saw something in the quality of his shot-making that deserved a second chance, and in powering past his previous Test best of 42, he was living up his lofty No.3 billing with some aplomb. With Australia’s three seamers favouring a full-length approach, there was ample opportunity for Vince to unfurl his favourite cover drive, and one stroke in particular – off Josh Hazlewood in the 11th over – evoked memories of Michael Vaughan’s tour de force in this country 15 years ago.

Vince had arrived at the crease with more haste than he might have hoped, following Cook’s departure in only the third over of the morning. Starc was his nemesis, probing relentlessly on and around off stump and repelled, for the most part, with that familiar raise of the bat, the (non-)stroke with which Cook conquered Australia in the summer of 2010-11.

However, after picking off his first runs through third man with stereotypical ease, Cook had no answer as Starc tightened his line onto the top of off stump, and induced a fateful snick through to Peter Handscomb at first slip. He was gone for 2, and England were 2 for 1.

Astonishingly, for all the talk of Australia’s latest fire-breathing trio of fast bowlers, none of Starc, Hazlewood or Cummins had ever played in a home Ashes Test – England’s attack leader, James Anderson, by contrast, has played in 13 Down Under.

And when Cummins was brought into the attack for the first time in the eighth over, it was the first time he had ever bowled in a home Australia Test, an extraordinarily delayed gratification for a bowler who first took the world by storm against South Africa in 2011-12.

Cummins turned up the heat, as he had been expected to do, but found little assistance in the wicket as England repelled him with relative ease. It was telling how much time both batsmen had whenever the ball was pitched short, and the biggest concerns that either batsman faced was when the pitch was taken out of the equation entirely, particularly when Starc located a hint of swing for his yorker towards the end of the first hour.

After reaching lunch on 59 for 1, England’s progress was stymied by an unexpectedly persistent rain cloud, that appeared to have settled over the Gabba at the exclusion of the whole of the rest of Brisbane. And upon the resumption, Lyon in particular settled into a probing spell, testing Vince’s patience with flight and bite outside off. Eventually that patience snapped, but with a perfectly belligerent dance and drive through the covers, as Vince allowed his confidence to take hold of his judgement to perfect effect.

A player who had been accused in the past of making flighty 30s without ever going on, had taken a massive step towards repaying the confidence he had been granted by the selectors, but with Cummins just threatening to make the old ball talk, Vince’s hardest work, you sensed, was about to come.