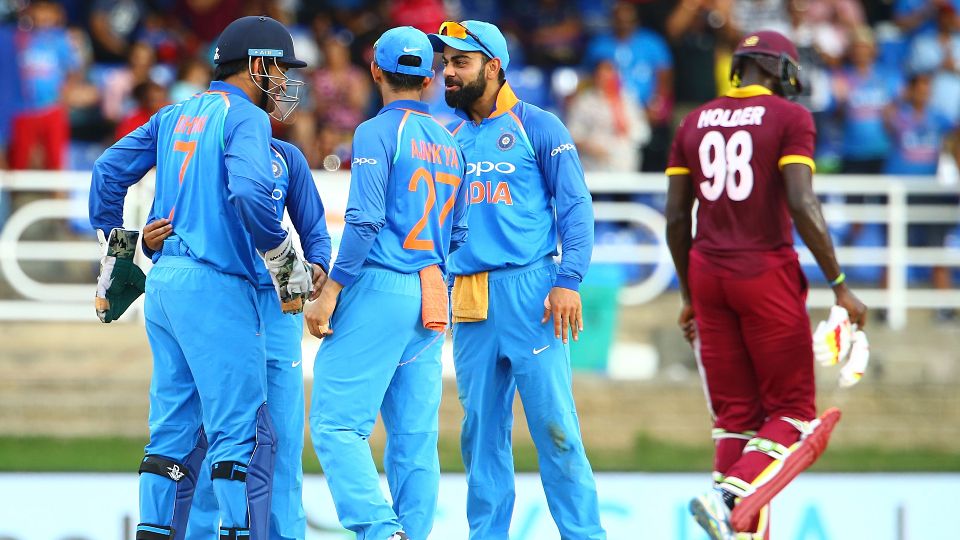 Can change of scenery do West Indies good?

MS Dhoni and Kedar Jadhav added 81 in the last 7.4 overs to take India to a fighting total on a two-paced pitch and one-paced outfield: slow. The 300-scoring machine that the India batting is came to a slow screeching halt as West Indies used the slowness of the surface and the sticky bounce to keep India quiet: after the seventh over, India had to wait for the 43rd over to take the scoring rate back over four.

Despite the late hits from Dhoni and Jadhav – if Jadhav’s innings was 40 off 26, Dhoni scored 50 off the last 29 balls he faced – this was the third-lowest total this decade for a side batting first and losing four wickets or fewer. This was India’s lowest defence since October 2015. Ajinkya Rahane, auditioning for the opener-cum-middle-order reserve role, batted through 42 overs, but managed to score only 72; his strike rate of 64.28 was the second-slowest since 2010 for openers batting first and facing 110 balls.

Devendra Bishoo was again the pick of the bowlers, going for 38 runs for the wicket of Yuvraj Singh and adding a stunning catch to it. The start of the match was delayed by 45 minutes because of 18 hours of rain on the day before the match, and West Indies didn’t minding sitting back and waiting more. They were happy to dig the ball into the wicket as opposed to looking for any seam movement that you often get on damp pitches. Shikhar Dhawan and Virat Kohli didn’t display the required patience to weather this mode of bowling. Dhawan ramped a short ball but lack of pace did him in. Despite struggling against the unpredictable bounce, Kohli went to steer a rising delivery and gave the man at gully a catch. India 34 for 2 in the 10th over.

That man at gully, Kyle Hope, would have mixed feelings as he prepared to open the innings with his brother Shai: after taking an excellent catch to send Kohli back, he dropped a simpler offering from Dhoni when he was 28 off 50. Dhoni ended up with 78 at nearly a run a ball. Yuvraj Singh, too, enjoyed similar luck: edging through vacant slip region, getting away with a plumb lbw call not reviewed, but fell in a manner similar to the Champions Trophy final: playing outside the line of a legbreak, for 39 off 55.

Rahane at the other end struggled to find the momentum he had achieved in scoring 19 off the first 19 balls he faced. In the 70 runs that he added with Dhoni in 16 overs, the focus seemed to be on taking the innings deep. In the 39th over, Dhoni decided he had taken it deep enough, looking to attack Bishoo’s ninth over, but got away with a slog that didn’t reach long-on and with another that fell in K Hope’s hand but popped out at short third man.

Rahane wasn’t so lucky. He decided the 43rd over was the time to go but Bishoo judged his upper-cut perfectly, ran in from deep point, and dived at the right moment. Rahane had gone after Miguel Cummins not just because there was finally pace on the ball but also because debutant Kesrick Williams, charged with bowling five overs out of the last nine, was doing well.

So Dhoni targeted Jason Holder, and took 17 off his last over, stunningly fetching one length ball from wide outside off and depositing it flat over square leg for six. Jadhav saw Dhoni’s innovation, and raised him a sweep shot off Cummins, having gone on a knee and well outside off well before Cummins released, and then pulling off the shot with surprising ease thanks to his still head. Rahane’s wicket perhaps came at the right time for India.