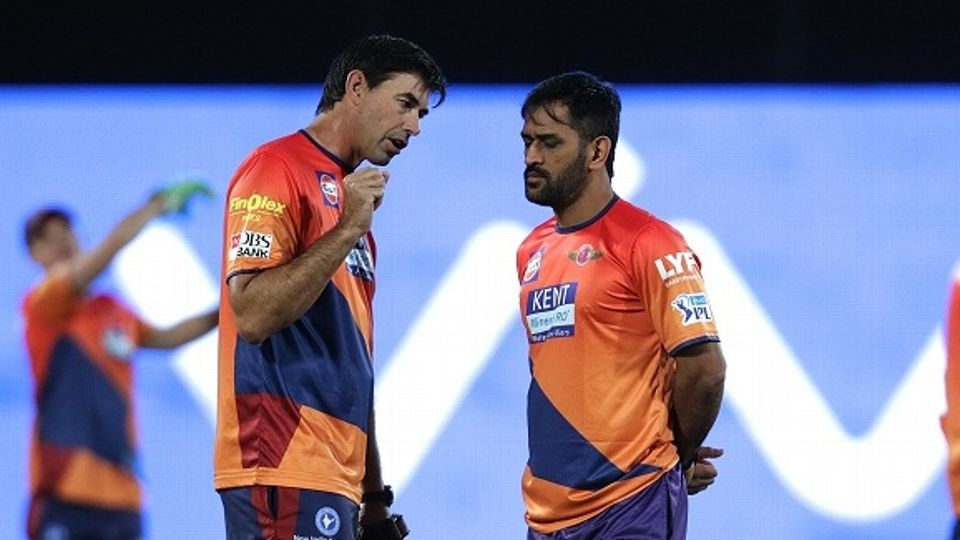 Fleming: Dhoni not arrogant enough to assume he will play 2019 World Cup

Stephen Fleming, the former New Zealand captain, believes MS Dhoni can extend his international career until the 2019 World Cup. Fleming, who has worked alongside Dhoni during IPL coaching stints with Chennai Super Kings and Rising Pune Supergiant, believes the former India captain will relish the competition he faces from players like Rishabh Pant, KL Rahul, Dinesh Karthik and Wriddhiman Saha for the spot of India’s first-choice limited-overs wicketkeeper-batsman in the immediate future. Although Dhoni will be 38 by the 2019 World Cup, Fleming is convinced he will continue to make significant contributions to the Indian team.

“There are a lot of players who can do that, but there is only one MS Dhoni at the moment,” Fleming said, in an interview with ESPNcricinfo. “I think his track record deserves the first crack at it. He has balance in his life now so he can get fit and come back fresh. I think he will do it. He is aware that he needs to keep performing and that’s when great players are at their best. If you get too comfortable you are not at your best.

“He is not arrogant enough to assume that he will make it through to the 2019 World Cup. He’s made it clear that he wants to play that World Cup but he knows he also to do well to do that. He’s now trying to prove his worth as he did when he was a youngster. That again is a tribute to his approach to the game and his humility towards the game. He’s desperate to keep performing. If he feels he stops performing and starts to lag and becomes a hindrance, then he will give up the game.”

Dhoni’s future in the Indian ODI team has been the subject of much speculation in recent years. His numbers since the 2015 World Cup, too, haven’t been as impressive as earlier. In 21 innings since that tournament, Dhoni has made 776 runs in 21 innings at an average of 38.80 and a strike rate of 86.99. Overall, in ODIs, he has scored 9275 runs in 286 matches at an average of nearly 51.

Fleming concedes that while the “giddy heights” of four to five years ago will probably be impossible to replicate, Dhoni can still be relied upon to deliver in crunch situations. Fleming is also of the view that Dhoni is best placed to continue as a finisher rather than move up the order, a move that the former India captain himself desires. “It [moving up the order] depends on the balance of the side,” Fleming reasoned. “If you have straight-out batsmen, then I wouldn’t. He can do it but what you have to look at is that his strength is finishing the game. People say why don’t you get him in earlier but the whole game changes from the 40th over or the 16th over if it is a T20 game when it becomes [the] death [overs]. And that’s where he’s been the best, I think.

“So you have to be careful you don’t take that strength; when you apply it earlier, you lose that, maybe he gets out early. Not many can do what he can in the last stanza but many can do that job in the middle. So you don’t want to take away that strength just to give him more time and get him up the order to play a more substantial innings, whereas his strength is in the last few.

“We have such high expectation of what he can do and often that is unfair. There is going to be some slippage, every great player has slipped a little bit as they’ve got older. At key times he is still contributing. Even this IPL it wasn’t there as much as other years but at key times he was there. In the game against Mumbai [Indians], a virtual semi-final, he got 40 off a few balls and played a great hand.

“The other thing is to play without fear. Often when you get older, the consequence starts to creep in. So what we’ve talked about is playing that fearless brand of cricket that he’s become known for, and making sure that he doesn’t get too cautious and too worried about getting out and the consequences of that. He’s at his best when he has no fear.”

While Dhoni’s batting form appears to have declined in recent years, his glovework has remained of the highest quality. India’s chairman of selectors, MSK Prasad, recently described Dhoni as the best wicketkeeper in the world and from his vantage point in the Rising Pune set-up, Fleming believes Dhoni’s keeping is “almost getting better”.

“I can’t say it is through a lot of training,” Fleming laughed. “In fact during my time in IPL, I have not seen him do any wicket-keeping training, it is all natural and it’s unorthodox but it’s fast and effective. Some of the dismissals and stumpings during the recent IPL were absolutely dynamite. So there’s nothing wrong there and that’s a great sign of reflexes and where he is, because people are questioning his age and his batting and the role he can play. If his keeping was deteriorating that might be a sign but it is actually getting better, which is a real positive for India.” “The fact that he is a wicketkeeper, he is used to positioning players, but it’s still a challenge to sit back.” © BCCI

Fleming believes one of Dhoni’s greatest challenges in the months ahead will be to adjust to a role as just another player in the team. Dhoni stepped down as ODI and T20I captain at the start of the year, after nearly a decade at the helm.

“It is very difficult, I can speak from my own experience,” Fleming said. “Once you get away from that decision-making, people can say it’s very easy, you can focus on your own game and do your own thing, but it is very hard to switch the other things off. You are so used to being the decision-maker, moving players and being part of the tactics, it becomes a key part of how you play the game. It does take some adjustment.

“The fact that he is a wicketkeeper, he is used to positioning players, but it’s still a challenge to sit back. You want to be part of decision-making, it is a key part of why you play the game. It is one of his challenges going forward. He has coped with it pretty well so far. He needs to be used to add that value and experience he has had over the years and more so for him, to feel like he is contributing rather than the other way round.”

Gaurav Kalra is a senior editor at ESPNcricinfo. @gauravkalra75