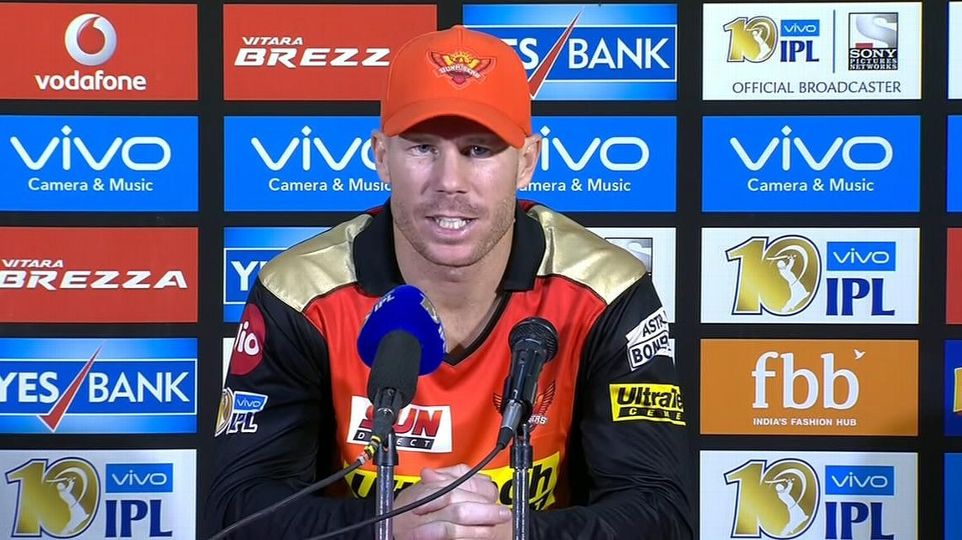 Had a game plan to commit to my shots – Warner

When Sunil Narine was introduced in the fifth over of Sunday’s game between Sunriser Hyderabad and Kolkata Knight Riders, David Warner was busy razing the visitors’ attack. If anyone thought Narine’s arrival would herald a period of watchfulness from Warner, he dismissed such thoughts first ball, switch-hitting a six over short third man to register a fifty off 20 balls, halfway to what would become the fifth-fastest hundred in IPL cricket. After Sunrisers completed their 48-run thumping of KKR, Warner said his assault against the spinners was planned.

“It was great that I went out there and had a clear game plan,” Warner said at the post-match press conference. “I just said to the guys ‘commit to your shots’.”

Speaking to the IPL website later, he elaborated on this plan to apply pressure to KKR. “When you got a quality spin-bowling unit bowling against you, you always have to have a game plan. I try and take that risk out by backing my strengths. The reverse-sweep is one of my strengths.

“I thought, tonight, I had to have that clear plan while playing and I did. I wanted to try and mix it up by coming down the wicket and putting a bit more pressure on them. I tried to make them bowl faster into the wicket. They bowled faster on a few occasions and didn’t at times. But that is the kind of game plan you’ve got to have.”

Warner finished with 78 runs off 30 balls against the spinners, and Sunrisers’ opening stand amounted to 139 in 12.4 overs. However, Warner’s partner Shikhar Dhawan accounted for just 29 off those, off 30 balls. Warner said that was the kind of batting required of Dhawan at that stage.

“I have to make a special mention of Shikhar Dhawan – the role that he played tonight,” Warner said. “I had to play that role [at the start of] last game when he was going all guns blazing. And Kane Williamson is unbelievable, he just comes and knocks it and gets a 40. It just sums it up for us.”

Warner also praised 23-year-old fast bowler Mohammed Siraj, who made the first breakthrough for Sunrisers in their defence of 209, and then claimed a well-set and threatening Robin Uthappa. Having the experienced Bhuvneshwar Kumar around to guide the young pacers in the squad was a big plus, he said. “Siraj is learning on the go and that is what we expect. It is fantastic. That is the quality of this Sunrisers unit. We are not harsh critics but we allow the guys to get chances, and the way he has come out and taken his chances is fantastic.

“And it is great to have Bhuvneshwar Kumar there always talking to him. An experienced bowler like Bhuvi is of great help.”